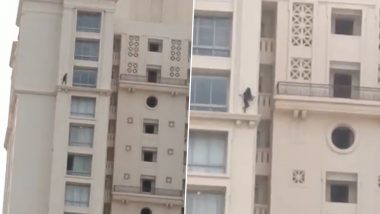 A dangerous video is currently doing the rounds on social media which shows a little girl walking on the outer wall of a tall skyscraper. Even looking at the video will give you the chills as the little girl is seen walking carelessly on the wall of the tall building. The exact location of the video is not known but some people on Twitter are complaining to Thane police to look into it. Users are saying it is from Hiranandani Meadows in the city and have asked the police to look into it. But the video has been shared on Twitter since yesterday and several claims state that it is from a posh Gurgaon city or Chennai. It is said to be some sort of Dare Challenge among the children and a word of warning is given over social media to all parents. Brothers Jump Off 33 Feet From Window After House Catches Fire in France’s Grenoble, Saved by Onlookers in Dramatic Rescue (Watch Video).

As per some tweets, people have said it is from Thane's Hiranandani complex and can be heard saying, "She's doing this for the third time." Other netizens have also posted this video claiming they have received it over WhatsApp, however the location changes. Some say it is from Gurgaon, some have said it is from Chennai. The tweets say it is some sort of Dare Challenge among the kids these days and that parents need to be aware of what their kids are up to.

@ThaneCityPolice Hie sir you can see 1 girl is walking on the small patch outside area of her building. This is suppose to be Hiranandani Meadows thane. You can clearly hear in that video the person is saying she is doing for 3rd time. Please note this pic.twitter.com/q6zHaz7GLI

@ThaneCityPolice received this video on whatsapp, this is crazy “See this girl in Hiranandani Estate. Is it for adventure, thrill

Same Video But From Gurgaon:

The result of a “Dare challenge” amongst youngsters on social media these days !! This is in one of the Gurgaon societies. Parents should be alert.

Someone sent this on whatsapp, some child in Gurugram has taken a dare challenge and engaging in this v dangerous exercise, parents pl be careful and mind the kids . Thank God she is safe but this can prove fatal pic.twitter.com/G9EDkvyrhL

Someone Said it's Chennai

This is my apartment in Chennai.. who the hell told you it was Gurgaon and it is a dare challenge?

So the exact source from where is the video is not known and there are no details about what was the kid up to and was any action been taken against her parents. But it gives an important message that parents need to be aware of what their children are participating in. This reminds us of another recent video that went viral from China when a group of children were caught sliding over the roof of a tall building. A group of children were seen playing on the roof a 32-storey building, which they accessed from a fire exit. A complaint was lodged against their parents.

(The above story first appeared on LatestLY on Aug 06, 2020 02:34 PM IST. For more news and updates on politics, world, sports, entertainment and lifestyle, log on to our website latestly.com).