Time and again, videos of cops from Uttar Pradesh Police coming to a fist-fight or fighting in the open have surfaced online, causing embarrasment for the Police department in Uttar Pradesh. However, there seems to be little attention paid to the reason and in resolving such matters so that they do not occur again. 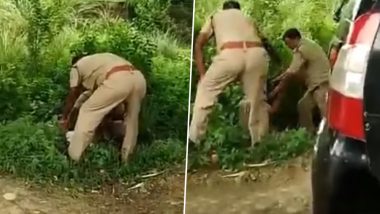 Kanpur, August 20: In yet another incident causing embarrasment to the Uttar Pradesh Police, two UP cops exchanged blows publicly on a road in Kanpur following a heated argument over "who would sit on the front seat." The video of the incident went viral on the social media in no time, with netizens commenting on the sad state of affairs in the UP Police department. Uttar Pardesh: Police Constables Fight Over 'Bribe' in Prayagraj, Suspended After Video Goes Viral.

The fight took place after an argument broke out between the cops over the issue of sitting on the "front seat" of UP Police 100 car. The fist-fight was so intense that passersby tried to intervene but to no avail. Uttar Pradesh Cop Marries Dreaded Gangster, Embarrasses UP Police.

A video of the incident shows the nature of the fight between the cops. The policemen in uniform fighting on a road-side made for a shocking sight for everybody who witnessed the fight and the video.

Both the cops who wanted to sit on the front seat only ended up embarrasing themselves and the Kanpur police department. After the video went viral, the Kanpur Police took action on the cops and suspended them for their behaviour.

This video comes just days after two police constables in UP Police allegedly fought over the "distribution of bribery" and the act was caught on camera. The video of the constables fighting went viral and news agency ANI tweeted the video of the incident that shows the cops engaged in a fierce "blow of laathis."

(The above story first appeared on LatestLY on Aug 20, 2019 05:19 PM IST. For more news and updates on politics, world, sports, entertainment and lifestyle, log on to our website latestly.com).