The two cops allegeldy fought over the distribution of bribe money. The grainy video shows the constables beating each other mercilessly with sticks. The other cops present at the scene try to separate the two policemen fighting but it fetches no result as the brawl intensifies. Both the constables have been suspended, reported ANI. 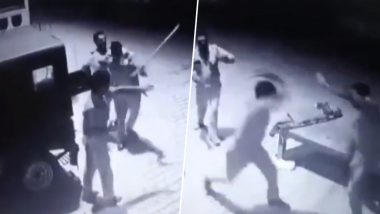 Lucknow, August 13: In yet another incident causing embarrasment to the Uttar Pardesh police, two police constables allegedly fought over the "distribution of bribery" and the act was caught on camera. The video of the constables fighting went viral and news agency ANI tweeted the video of the incident that shows the cops engaged in a fierce "blow of laathis." Uttar Pradesh Cop Marries Dreaded Gangster, Embarrasses UP Police.

It can be very clearly seen in the video that following a brief quarrel between the constables, both the cops pick up laathis (sticks) and start hitting one another with it.

As the figting gets intense, one of the constables falls on the ground. Other cops present try to calm down the fighting constables, but to no avail.

Watch the Vidoe Below

#WATCH Two policemen fight with each other allegedly over a bribe, in Prayagraj. Ashutosh Mishra, SP Crime, says “The incident took place day before yesterday. Both the policemen have been suspended. Investigation underway." pic.twitter.com/d83DItRTPf

Ashutosh Mishra, SP Crime, was quoted saying by news agency ANI that the incident took place on Sunday, August 11. The officer added that both the constables have been suspended and that investigations are underway in the case. This is the second such incident where cops in UP have been caught live on camera fighting over bribe distribution.

A video of two policemen publicly fighting at an intersection in Lucknow, allegedly over sharing money earned from bribes had gone viral in 2016 and the incident had gained widespread outrage.

(The above story first appeared on LatestLY on Aug 13, 2019 07:22 PM IST. For more news and updates on politics, world, sports, entertainment and lifestyle, log on to our website latestly.com).