As winter has made a comeback in Mumbai, city residents took to Twitter with memes and funny GIFs on it. 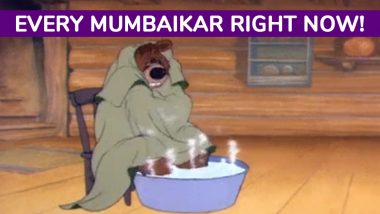 Mumbaikars were surprised as temperatures continued to the drop from Wednesday onwards. The city has been witnessing cold breeze since a week and now the cold has gripped the entire city once again. Temperatures dipped to 19 degrees in the city on Saturday morning, something the city was not prepared for. As winter has made a comeback in Mumbai, city residents took to Twitter with memes and funny GIFs on it.

India Meteorological Department (IMD) recorded that the maximum temperatures fell from an average of 35.3 degrees on Sunday to 28 degrees. However, the cool conditions have resulted in poor quality of air. Pollution levels have risen in the city giving rise to various respiratory illness. On Saturday, night temperatures are expected to be at 13 degrees. Meanwhile, we take a look at jokes and winter jokes about Mumbaikars dealing with the chilly weather on social media. Mumbai Winters: City Experienced Coldest Day on February 8, Temperature Likely to Dip Further Over Next Two Days.

Here are some of the funny memes and winter jokes being shared by Twitterati:

It is so bloody cold #Mumbai pic.twitter.com/swCArJ43Ln

Begins the epic Mumbai vs Delhi war on 'who's colder':

For all interested in the debate, here's your official entry:

Come to Delhi. U will know what real cold is🙂

Fans off, jackets on, wtf Mumbai I haven't paid for Delhi weather here.

We will all remember this cold fondly when the summer season comes.

Seems that's the case with most Mumbaikars:

What's with this sudden cold Mumbai? I don't even have any winter clothing left with me :( #mumbaiweather #unexpectedcold #nicebutstrange

The city witnessed a drop in almost 6 degrees during the week. According to IMD, on Friday, minimum temperatures were recorded at 17.60 degrees in Colaba and 14.40 degrees at Santacruz. IMD has advised citizens to be prepared for the chills as it poses a moderate health risk from air pollution.

(The above story first appeared on LatestLY on Feb 09, 2019 10:41 AM IST. For more news and updates on politics, world, sports, entertainment and lifestyle, log on to our website latestly.com).