Their love story has garnered international headlines and the heart-touching clip has earned more than 1.2 million views. 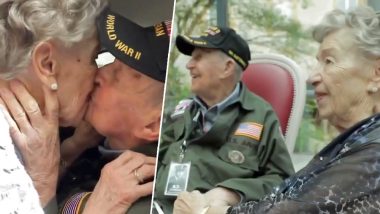 They say it right, if you love someone dearly, the whole universe conspires to unite you. And that is what happened to the American soldier, who fell in love with a French woman, during World War II, but was parted due to a national emergency. Now 75 years later, the US Army veteran, KT Robbins, had finally met his first love, Jeannine Pierson, and the emotional unison video has left Twitterati in happy tears. Their love story has garnered international headlines and the heart-touching clip has earned more than 1.2 million views. Same Sex Flamingo Couple’s Romance Is the Best Viral Moment This Pride Month, Love Birds May Even Raise a Chick Together.

The 97-year-old Robbins, first met Jeannie when he asked her mother to help him with his washing, while he was stationed in their town, Briey in 1944. Mr Robbins, fell for the then 18-year-old, Jeannine, but he never saw her again, after he was sent to the Eastern Front, reported France 2. “I told her maybe I'll come back and take you, but it did not happen like that,” the veteran can be heard saying the French broadcaster. Their romance was cut short, and Robbins eventually got married, but he never forgot Jeannine. The moment, the reporter told him, that his long-lost love is alive, he could not control his emotions.

Watch Touching Reunion of the Lovers

Robbins was filmed meeting his sweetheart again in a touching scene, and the unison happened in France on the 75th anniversary of the D-Day landing. Upon seeing her, he can be heard saying, “I always loved you. You never got out of my heart.” He even showed her the picture of her younger time, which Robbins kept with him for all 75 years. Jeannine also told the reporter that she wept when Robbins left and went on to learn some basic English in the hope that he would return someday.

After spending a few hours together, it was time for Robbins to leave, as he head to Normandy. Teary-eyed Robbins can be heard saying, “Jeannie, I love you girl.” The pair promised to meet up very soon in the future.

(The above story first appeared on LatestLY on Jun 14, 2019 06:35 PM IST. For more news and updates on politics, world, sports, entertainment and lifestyle, log on to our website latestly.com).