Youtube is down once again and obviously, Twitter is flooded with funny memes and jokes. It has become a tradition to take over Twitter with hilarious posts after any social media platform faces an outage. 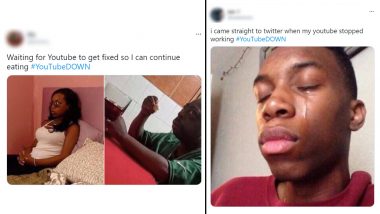 Youtube is down once again and obviously, Twitter is flooded with funny memes and jokes. It has become a tradition to take over Twitter with hilarious posts after any social media platform faces an outage.  Youtube faced some issues with its player functions and after blaming their respective WiFi providers, netizens took straight to Twitter to share funny memes and jokes. While many may have been frustrated this morning because of YouTube outage BUT the best thing about the whole issue was the funny memes and jokes that went viral on social media.

As soon as people were not able to play youtube videos and creators were not able to upload videos on the video-sharing platform, Twitter was flooded with funny reactions and memes. Just recently on Apr 26, 2021, YouTube went had gone down and as Google-owned website faced an outage and netizens were unable to watch videos, people kept sharing funny memes and jokes on social media. The reason behind the 'YouTube Outage' is not clear. Several users across the globe are reporting a playback error on several YouTube videos.

Right from making the food wait memes to shocking reactions, Twitter was sent to frenzy ever since the outage. In some videos, the error was as small as a drop in the resolution below the desired 1080p or 720p. Others noted that their videos were stopping at random, while some reported that the entire YouTube platform is down and not working for them at all. People were wondering if YouTube died because the creators are not able to upload videos and even their dashboard wasn't responding. But the best part has to be the funny reactions and memes on Twitter. Check out:

Google waking up all YouTube technicians at this hour. #YouTubeDOWN pic.twitter.com/6FEhEYlOml

Youtube TV had me thinking that it was my internet that was the problem. #YouTubeDOWN pic.twitter.com/EH0rJ6JI7d

You Tube Goes down

Me Who was thinking Wifi isn't working #YouTubeDown pic.twitter.com/qvrndqv1Kn

In other news, in a bid to bring more engagement on its platform that is similar to TikTok, YouTube said that it plans to pay $100 million to creators who use YouTube Shorts. Each month, the company will reach out to thousands of creators whose Shorts received the most engagement and views to reward them for their contributions. They will also ask these creators to share their feedback so they can continue to improve the product experience.

(The above story first appeared on LatestLY on May 19, 2021 09:57 AM IST. For more news and updates on politics, world, sports, entertainment and lifestyle, log on to our website latestly.com).