Shaheen Shah Afridi and Mohammad Nabi would be the ideal choice for the captain and vice-captain's slots of your fantasy teams for this match. Both Pakistan and Afghanistan are heading into this clash with impressive victories in their previous games and thus, would be high on confidence. 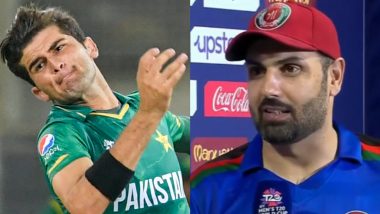 Afghanistan are all set to clash against Pakistan in the T20 World Cup 2021 on Friday, October 29. Afghanistan have had a dream start to their T20 World Cup campaign this year with a massive 130-run win over Scotland--their biggest win till date. But Pakistan would pose a separate challenge, one that might just be too difficult. Pakistan could not have asked for anything better in the competition, securing massive wins over arch-rivals India and then a close one over New Zealand. Babar Azam and his side have become the team to beat in the competition alongside Eoin Morgan's England. AFG vs PAK Dream11 Team Prediction: Tips To Pick Best Fantasy Playing XI for Afghanistan vs Pakistan, Super 12 Match of ICC T20 World Cup 2021

Fans making Dream11 Fantasy Teams would know that the captain fetches double points while the vice-captain multiplies x1.5 times. Having said that, let us take a look at the recommendations for your fantasy teams this month.

Shaheen Shah Afridi has been one of the best players for Pakistan in this competition so far. He started off with a bang against India, scalping the wickets of KL Rahul, Virat Kohli and Rohit Sharma and then returned with figures of 1/21 against New Zealand. With the new ball, he is one of the best in the competition and currently as he can nail in those in-swinging yorkers and also has the potential to bowl well at the death. ICC T20 World Cup 2021 Points Table

The Afghanistan captain has been in good form in the competition and his performance would be crucial for his side's chances against a top team like Pakistan. He has been in good form with both bat and ball. Against Scotland, he scored 11 runs off just four balls. Although he did not have a good run with the ball, conceding 11 runs in one over. He also has been good with his captaincy skills and would be a good choice for the vice-captain's slot.

(The above story first appeared on LatestLY on Oct 28, 2021 06:48 PM IST. For more news and updates on politics, world, sports, entertainment and lifestyle, log on to our website latestly.com).