Ahead of IPL 2020, Mumbai Indians Issue Warning to Other Teams, Share Jasprit Bumrah’s Pic With Caption ‘Calm Before the Storm’ 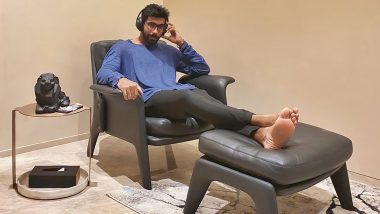 Since his debut for Mumbai Indians in 2013, Jasprit Bumrah’s stature has continued to grow in the cricketing world. No matter the format, the 26-year-old is considered as one of the best pacers in the sport at the moment. Much like many others, the Indian cricketer has been away from the sport due to the coronavirus pandemic but will return back to action in the latest edition of IPL. MI Squad for IPL 2020 in UAE: Check Updated Players' List of Mumbai Indians Team Led by Rohit Sharma for Indian Premier League Season 13.

Before the cash-rich league begins later this year on September 19, 2020, in the United Arab Emirates (UAE), four-time champions Mumbai Indian shave issued a warning for the other teams. The franchise shared a photo of pacer Jasprit Bumrah with the caption ‘Calm before the storm’ stating that the 26-year-old is ready for the upcoming season. IPL 2020: Jasprit Bumrah Shares Excitement on Social Media, Says ‘It’s Almost Time’.

With Lasith Malinga in his twilight years, Jasprit Bumrah has successfully spearheaded the Mumbai Indians bowling attack in recent years. The Gujarat-born cricketer has picked up 82 wickets in 77 games for the franchise and in last year’s title-winning season, he took 19 wickets from just 16 matches.

IPL 2020 was originally scheduled to begin on March 29, 2020, but was postponed until further notice due to the coronavirus pandemic. However, the governing body has now received the green light to stage the tournament in UAE from September onwards.

This will be the second time that the cash-rich league will be played in the United Arab Emirates, with IPL teams playing their first five matches in the country during the 2014 edition. Apart from this, IPL 2008 was also held outside India, when South Africa hosted the entire tournament.

(The above story first appeared on LatestLY on Aug 11, 2020 05:07 PM IST. For more news and updates on politics, world, sports, entertainment and lifestyle, log on to our website latestly.com).