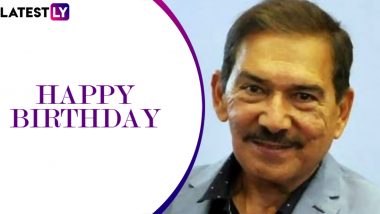 Former Indian batsman Arun Lal celebrates his 65th birthday on Saturday. Born on August 1, 1955, the right-handed batsman was a stalwart of Indian domestic cricket and his record at First-Class level speaks volumes of his prowess. In fact, Lal played a vital role in the rise of Bengal and East Zone cricket team in the early eighties. The former batsman also went on to play some significant knocks in international cricket but was never also cement his place in the team. After retirement, Lal became an active commentator and gave his voice in many matches. Below, we’ll look at some lesser-known facts about him. Pitch for Ranji Final Very Poor, BCCI Should Look into It, Says Bengal Coach Arun Lal.

Lal got a chance to make his Test debut against Sri Lanka in 1982 as Sunil Gavaskar got injured ahead of the game. The opener impressed one and all by scoring a brilliant fifty in his maiden outing and looked a good prospect for future. He went on to play some more impressive knocks but wasn’t able to cement his place in the team. Nevertheless, he continued to showcase his blitzes in domestic cricket. At the time of his retirement, he was the fifth highest run-scorer in Ranji Trophy history. As the former cricketer turns a year older, let’s look at some lesser-known facts about him.

(The above story first appeared on LatestLY on Aug 01, 2020 08:00 AM IST. For more news and updates on politics, world, sports, entertainment and lifestyle, log on to our website latestly.com).