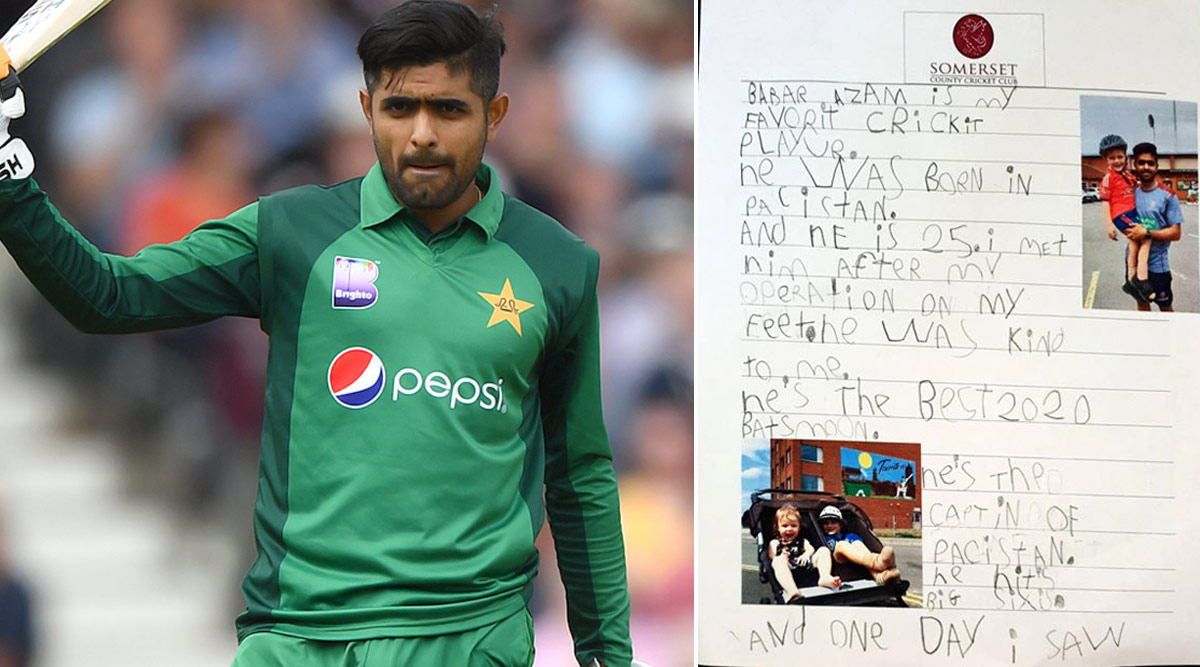 Pakistani cricketer Babar Azam has taken giant strides in international cricket and is touted as one of the best batsmen in the modern era. Courtesy his stellar performances, the Pakistani T20I skipper has also gained a lot of fans across the globe. Among those ardent followers, there is a 5-year old from U.K. named Oscar. The little boy wrote a note in which he heaped praises on Azam and called him his favourite cricketer. The kid also revealed that he met the right-handed batsman after his foot surgery. England county club Somerset shared the note on Twitter and Azam made a heart-warming reply. Babar Azam, Sarfaraz Ahmed, Wahab Riaz Nail the Fitness Drill (Watch Videos).

The 25-year old thanked his little fans for his gesture and wished him luck. He called Oscar a ‘Rockstar’ and also expressed his desire to meet him in future. “Hey Oscar, thank you so much for such a kind note. I am so proud of you buddy. You are a rockstar. Study hard & play even harder champ! Look forward to meet you,” wrote the number-one ranked T20I batsman on the micro-blogging website. Azam’s reply won a lot of hearts on the internet too as netizens praised the star for his kind gesture.

Hey Oscar, thank you so much for such a kind note. I am so proud of you buddy. You are a rockstar. Study hard & play even harder champ! Look forward to meet you. #RiseAndRise https://t.co/ZKEVVhwM3b

Azam was last seen in action during the 2020 edition of the Pakistan Super League (PSL) where he led Karachi Kings to the semi-finals of the tournament. However, just like many other sporting events around the world, the knock out stages of the gala T20 tournament was also called off amid the COVID-19 scare and the reschedule dates are yet to come.