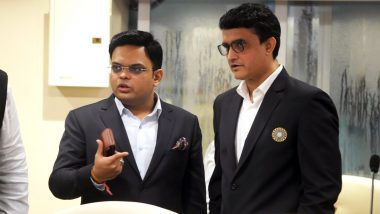 BCCI president Sourav Ganguly and secretary Jay Shah could extend their stay in the Indian cricket board despite the ‘cooling-off’ period rule after the Supreme Court, which was set to hear BCCI’s plea of letting its president and secretary continue as office-bearers, failed to list the matter for hearing. The Supreme Court had set August 17 as the date for a two-judge bench to hear BCCI’s plea. But according to a report, the court is yet to list the matter and with the weekend approaching, the plea could be further postponed for a hearing. IPL 2020 Update: BCCI Team to Arrive in UAE Later This Month for Recce of Facilities.

The two-judge Supreme Court bench of chief justice of India Sharad Arvind Bobde and L. Nagaswara Rao had earlier on July 22 had decided to defer the plea for a hearing until August 17. But according to a report from Outlook India, the Supreme Court had not listed the matter for a hearing till Thursday evening and with weekend falling, it is unlikely to get any priority. BCCI to Hand 2-Year Ban to Players Committing Age, Domicile Fraud.

The BCCI is seeking the Supreme Court’s permission to amend rule 6.4 in its new constitution, which was approved the apex court in August 2018. The new constitution was drafted by a committee led by former Chief Justice of India RM Lodha. The new rulebook brought a number of reforms, including age and tenure changes.

Clause 6.4 of the new constitution book reads: “An office-bearer who has held any post for two consecutive terms either in a state association or in the BCCI (or in a combination of both) shall not be eligible to contest any further election without completing a cooling-off period of three years.”

By this rule, both Ganguly and Jay Shah are now ineligible to hold their current posts in the Indian cricket board as their terms had already drawn to an end last month. Both were elected to the president and secretary’s position in October last year but had previously served in the Bengal and Gujarat cricket associations respectively. The BCCI is seeking changes in six rules, with the tenure and age being the most important one.

Ganguly and Shah have already now completed six-year terms in Indian cricket administration (both state and BCCI roles combined) and therefore the rule asks them to stay away from the administration for at least three years each as a ‘cooling-off’ period.

The report from Outlook India states that BCCI’s plea, petitioned by BCCI treasurer Arun Dhumal, have come up at least 33 times at Justice Bobode’s court but has been heard only 10 times before being deferred. It also quotes a senior lawyer of the court commenting that the bench “may not be very keen” on hearing the matter and will allow it to be further postponed.

(The above story first appeared on LatestLY on Aug 14, 2020 11:00 AM IST. For more news and updates on politics, world, sports, entertainment and lifestyle, log on to our website latestly.com).