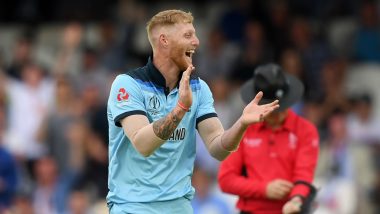 England all-rounder Ben Stokes is celebrating his 29th birthday today (June 04, 2020). Stokes was born in Christchurch, New Zealand on June 04, 1991, and then at the age of 12, he moved to England with his father Gerard Stokes who was appointed as a head coach of a rugby club. Stokes’ parents went back to New Zealand, but the cricketer stayed in England. He made his debut for England in August 2011 against Ireland in a One-Day International (ODI). A month later he made his T20I debut against West Indies. Stokes played his first Test against Australia in Ashes 2013-14. Ben Stokes Birthday Special: Headingley Heroics vs Australia in Ashes 2019 and Other Brilliant Performances by Star England All-Rounder.

The all-rounder was part of the England team which won the ICC Cricket World Cup 2019. In fact, he was instrumental in England’s win in the dramatic final against New Zealand after scoring valuable 84 not out. The all-rounder in the Ashes 2019 played a heroic knock of unbeaten 135 and helped England win the third Test by just one wicket.

As Stokes turned 29, his fans and other Twitter users made sure to wish the cricketer. #BenStokes is one of the trending topics on Twitter with wishes pouring in for the all-rounder. Here are some of the tweets: Ben Stokes Birthday Special: From Record Haul of Sixes to Cheeky Nicknames, Interesting Facts About England All-Rounder.

Send in your wishes for our all-round genius. 💗#HallaBol | #BenStokes | @benstokes38 pic.twitter.com/D6yCHrgQ7T

Being a pure cricket enthusiast, I not only look forward to Indian players but foreign players as well!! Be it from my personal favourite i.e. Mitchell santner to another all rounder #BenStokes... Happy birthday Ben Stokes!!!🤩🤩 Wish to see you on csk side someday!!😅😅😅 pic.twitter.com/5oxi17fBC2

When life hits you hard hit it back harder like ben stokes. #BenStokes #HappybirthdayBenStokes pic.twitter.com/yyP07X3H3J

(The above story first appeared on LatestLY on Jun 04, 2020 12:10 PM IST. For more news and updates on politics, world, sports, entertainment and lifestyle, log on to our website latestly.com).