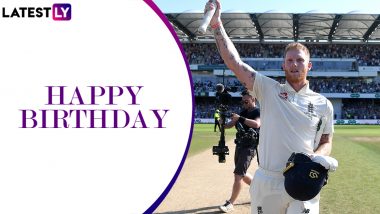 Arguably the best all-rounder in modern-day cricket, Ben Stokes celebrates his 29th birthday on Thursday (June 4, 2020). The career of the England star has been nothing but a fairytale so far. From being hit for four consecutive sixes in the last over of 2016 T20 World Cup final to play a pivotal role in guiding England to 2019 World Cup triumph, Stokes' journey is a perfect script for a Blockbuster movie. Stokes has emerged as a commendable batsman in the middle order and his knack of providing crucial wickets with the ball makes him a captain's delight. However, what sets him apart is his ability to deliver in the crunchiest of situations. Below, we'll look at five times when the star all-rounder took the opposition by storm. Ben Stokes Gives Hilarious Advice to Husbands Smashing Windows While Playing Cricket.

Making his international debut in 2011, Stokes didn't burst onto the scenes immediately but took some time. His breakthrough series was the 2013-14 Ashes down under where he delivered with both bat and ball and became a regular in the side. In fact, Stokes has played a significant role in the emergence of the mighty England side after 2015 World Cup disaster. Also, the New Zealand-born cricket currently holds the first and second spot in the latest ICC all-rounder rankings in Test and ODI respectively. As the talismanic cricketer turns a year older, let's revisit some of his special performances. England Cricket Team Resumes Training Under ‘Strict’ Protocols Amid COVID-19 Pandemic.

258 Vs South Africa in Cape Town

Facing the likes of Morne Morkel and Kagiso Rabada at the pace-friendly Cape Town track, Stokes unleashed absolute mayhem in the 2nd match of 2016 Test series and played a stellar knock. Coming to bat at number six, the left-handed batsman attacked the Proteas bowlers from the outset and scored runs all over the park. Fours and sixes were raining from his willow as he scored the fastest 250 in Test cricket. Riding on his brilliance, the visitors declared at 629/6. However, South Africa made a comeback with the bat and the match was drawn.

Stokes was up against his own countrymen in the 2019 World Cup finals. However, that didn't restrict him from playing a sensational Knock. Chasing 242 in the high voltage encounter, England lost four early wickets. However, Stokes, who batted at number five, steadied the ship alongside Jos Buttler and brought England innings back on track. After losing the wicket-keeper batsman in the 45th over, the southpaw brilliantly batted with the tale and managed to tie the encounter. The match eventually went to a Super Over where England came on top and lifted the prestigious title.

The right-arm pacer produced a sensational spell in the 3rd Test of West Indies' 2017 Tour of England and ripped apart the Caribbean batting line up in the first innings. Stokes looked unplayable from the moment he took the ball in hand as he tormented the opposition batsmen and registered his career-best figures in the longest format of the game. As a result, West Indies were bundled for 123 runs. While batting in the tricky wicket, the southpaw scored 60 important runs and helped his side win the game by nine wickets.

6/36 Vs Australia in Nottingham

Stokes made an impeccable use of the red cherry in the 4th match of Ashes 2015 and rattled the Aussie batting line-up in the third innings of the match. He first dismissed the openers Chris Rogers and David Warner, who were looking in fine touch. After that, the right-arm pacer took wickets in a cluster and registered his 2nd five-wicket haul in Test cricket. His efforts tightened England's grip over the face as the home team convincingly won the game by an innings and 78 runs.

135 Vs Australia in Headingley

The left-handed batsman played one of the best knocks ever, if not the best knock, in Test cricket during the 3rd match of 2019 Ashes series. England were 0-1 down after the first two games and the Aussies looked all set to win the third encounter too. England, who got bundled out for mere 67 runs in their first innings, were asked to chase down 359 runs to win the game. Nevertheless, Stokes didn't put his guards down and made a magnificent fightback. However, his efforts looked all set to go in vain as England needed 73 runs to win with only one wicket left.

Spectators began to leave the stadium, TV sets were switched off as the likes of Josh Hazelwood and Pat Cummins were breathing fire with the ball and result of the game looked a mere formality. However, Stokes played a once-in-a-lifetime knock and defied all odds. He kept number 11 batsman Jack Leach away from the strike for majority of the time and paced his innings to perfection. The southpaw went to guide England to a famous one-wicket win and the series got levelled 1-1.

Stokes will be seen back in action when West Indies will Tour England for a three-match Test series. Just like many other prominent players around the world, Stokes also hasn't played any professional match of late due to the outbreak of COVID-19 pandemic. Nevertheless, he was the Man of the Series in England's last Test assignment against South Africa and the all-rounder is expected to extend his purple patch against the Jason Holder-led side at home.

(The above story first appeared on LatestLY on Jun 04, 2020 09:00 AM IST. For more news and updates on politics, world, sports, entertainment and lifestyle, log on to our website latestly.com).