CSK had to win his game to remain alive in the playoff race but unfortunately, it was not to be as their difficult campaign was brought to an end with a defeat at the hands of the five-time champions. Mumbai Indians had earlier been eliminated from the playoff race. 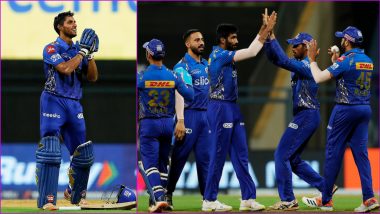 Mumbai Indians pulled off a thrilling five-wicket victory over Chennai Super Kings in IPL 2022 on Thursday, May 12. With this result, Chennai are officially eliminated from the competition and are no longer in contention to make it to the playoffs. Chasing 98 to win might have seemed to be an easy task but CSK made a spirited comeback after a poor batting show as they the five-time champions in trouble at 33/4. But a 48-run partnership between Tilak Varma and Hrithik Shokeen saw Mumbai take control of the game before Tim David came out and blasted 16 runs off seven deliveries to help Mumbai get their third win of the season. Devon Conway Dismissal: CSK Opener Unable To Use DRS Due to Power Cut at Wankhede Stadium in IPL 2022 Clash vs MI, Netizens React

Earlier, there was much talk about Devon Conway's dismissal, which came under controversial circumstances. The Kiwi batter was adjudged out first ball and he was not able to review the decision, as there was a power cut at the stadium. What's worse was that TV replays showed that the ball was missing leg-stump and Conway had to helplessly walk off without being able to do anything. That was the start of CSK's slump. Wickets continued to tumble one after the other and in no time, they had lost five batters within the powerplay. From then on,  it was going to be difficult for CSK to get to a competitive score, despite MS Dhoni being there at the crease. IPL 2022 Playoffs Qualification Scenario Explained

Dhoni's 36* off 33 deliveries with two sixes and four fours gave CSK some hope but it was all too much left on one man and with wickets tumbling at the other end, he could just wait and watch. Eventually, they were shot out of just 97. Daniel Sams was Mumbai's best bowler with figures of 3/16. Riley Meredith and Kumar Kartikeya took two apiece and Jasprit Bumrah along with Ramandeep Singh settled for one scalp each.

In response, CSK tried their best to make this run chase look difficult as Mukesh Choudhary and Simarjeet Singh bowled excellently in tandem. While Choudhary finished with 3/23 in his four overs, Singh did well too have figures of 1/22. But Varma showed immense maturity to play a steady 34*-run knock and eventually win the game for his side.

#This is also the first instance of five wickets falling in the powerplay in IPL 2022.

# 97 was CSK's second-lowest score in the IPL

#CSK failed to qualify for playoffs for just the second time.

Both Mumbai Indians and Chennai Super Kings would now look forward to their two remaining matches. While Mumbai are set to face Sunrisers Hyderabad on May 17, CSK would take on Gujarat Titans on May 15.

(The above story first appeared on LatestLY on May 12, 2022 11:41 PM IST. For more news and updates on politics, world, sports, entertainment and lifestyle, log on to our website latestly.com).