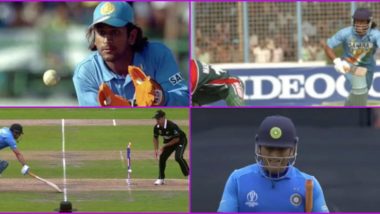 Former India captain and wicket-keeper batsman MS Dhoni took to Instagram as he announced his retirement from international cricket. The Chennai Super Kings (CSK) captain shared a showreel of his career which featured the highs and lows of his career. The video was accompanied by famous Hindi song 'Main Pal Do Pal Ka Shayar Hoon' Dhoni's retirement was on cards, but many expected it post the Indian Premier League 2020 (IPL 2020). Dhoni has not made it clear whether he will continue playing post IPL 2020 or not. However, it appears that retirement is purely from international cricket. Meanwhile, here we try to decode Dhoni's retirement announcement post. MS Dhoni Announces Retirement from International Cricket, Likely to Continue Playing in IPL.

No Retirement from IPL: The showreel video posted by Dhoni has images of him while representing India. And that indicates, he will continue playing IPL and represent CSK in future.

Main Pal Do Pal Ka Shayar Hoon' Song: The song Dhoni chose to go with his retirement video is from famous Bollywood movie Kabhi Kabhie which was released in 1976. The song was picturized on Amitabh Bachchan and sung by Mukesh. It was composed by Khayyam and written by Sahir Ludhianvi. It is an emotional song about life.

Thanks a lot for ur love and support throughout.from 1929 hrs consider me as Retired

(The above story first appeared on LatestLY on Aug 15, 2020 09:38 PM IST. For more news and updates on politics, world, sports, entertainment and lifestyle, log on to our website latestly.com).