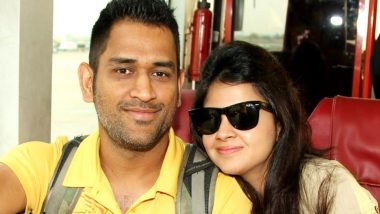 Not very long ago we told you that MS Dhoni got into an ugly spat with the umpires during the 17.5 over when the on-field umpire Chettithody Shamshuddin during the match with Rajasthan Royals, IPL 2020. The on-field umpire reversed the decision after adjudging Tom Curran as out, Deepak Chahar was handling the bowling duties and after the umpire went upstairs, the batsman was called back as they said he is not out. Now, this did not go down well with Dhoni and the Chennai Super Kings captain got into an argument with the umpire. His wife Sakshi Rawat also joined the bandwagon and apparently joined slammed the on-field umpire. MS Dhoni Indulges in an On-Field Altercation With Umpire During RR vs CSK, Dream11 IPL 2020, Netizens Slam Captain Cool For the Behaviour (Watch Video).

She took to social media and wrote, "If u r using the technology, then use it the right way…..out is out whether its catch out or lbw……” However, the tweet was deleted later. But a netizen had a snapshot of the tweet and the social media users posted the same on the Internet. In fact, one of them even said that Sakshi had put out an Instagram post about the same but deleted it later. Check out the snapshots shared by the netizens.

MS Dhoni had quite a long conversation with the on-field umpires. Talking about the match, Rajasthan Royals posted a hefty total of 217 runs. As of now, Chennai Super Kings has lost five wickets and we have Faf du Plessis and MS Dhoni batting for the side.

(The above story first appeared on LatestLY on Sep 22, 2020 11:04 PM IST. For more news and updates on politics, world, sports, entertainment and lifestyle, log on to our website latestly.com).