The Indian Premier League 2019 will begin from March 23 2019. The players of the respective teams have started arriving and the preparations are in full swing for the upcoming season. 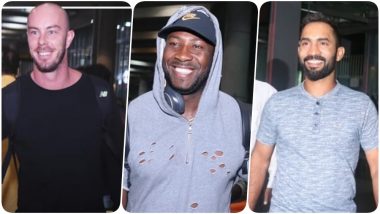 The Indian Premier League 2019 will begin from March 23 2019. The players of the respective teams have started arriving and the preparations are in full swing for the upcoming season. Now, ahead of the IPL 2019, Dinesh Karthik, Andre Russell and Chris Lynn have joined team KKR for the pre-season camp. A few players like Shubman Gill and Robin Uthappa had already reached Kolkata and had started preparing for the pre-season camp. MS Dhoni & Virat Kohli Challenge Each Other Ahead of CSK vs RCB, IPL 2019 Opening Match; Chennai Super Kings has a Hilarious Reaction (Watch Video).

The pictures of Dinesh Karthik, Andre Russell and Chris Lynn’s arrival were shared on the official page of the Kolkata Knight Riders. Team Kolkata Knight Riders will play their first game against the Sunrisers Hyderabad on March 24, 2019, at the Eden Gardens and then against Kings XI Punjab on March 27 at the same venue. Check out the pictures below: IPL 2019 Schedule in PDF: Download VIVO Indian Premier League 12 Full Timetable With Fixtures, Matches, Team and Venue Details.

Andre Russell is all smiles as he lands in the City of Joy.

After a rain shower last night, #Kolkata has been hit by a Lynnstorm! 🌪 . "My body feels a lot stronger now than the last time I was here. I can't wait to get going with the boys" 😎 #KKRHaiTaiyaar #KKR #VivoIPL #IPL2019 #ChrisLynn

The tickets for the matches have gone live and the franchise expects to have a full house. The two-time champions boast of having players like Piyush Chawla, Kuldeep Yadav, Prasidh Krishna, Nitish Rana, Sunil Narine, Shubman Gill and a few others. KKR had released six players with the likes of Mitchell Starc, Mitchell Johnson, R Vinay Kumar, Ishank Jaggi, Apoorv Wankhade and Tom Curran finding their way out of the franchise. The team has a strong top order.

(The above story first appeared on LatestLY on Mar 16, 2019 01:31 PM IST. For more news and updates on politics, world, sports, entertainment and lifestyle, log on to our website latestly.com).