Rory Burns kept England’s scoreboard ticking as he found an able partner in Ollie Robinson. The duo added 63 runs for the seventh wicket before Southee had Robinson caught. Meanwhile, you can stat highlights of day four. 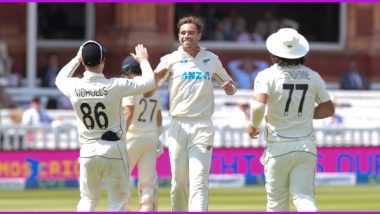 After day three of the ongoing Test between England and New Zealand was washed out due to rains, the day four saw plenty of action at the iconic Lord’s Cricket Ground in London. At stumps New Zealand are 62/2 and lead by 165 runs. England resumed the day’s play on 111/2 with Joe Root and Rory Burns at the crease. Tim Southee Fires Warning to India Ahead of ICC WTC Final, Picks 6/43 Against England at Lord’s.

Kyle Jamieson started the day on a positive note for New Zealand as he removed Root who failed to add a run to his overnight total. England were further reduced to 140 for six as Tim Southee picked three wickets in quick succession. Southee accounted for Ollie Pope, Daniel Lawrence and James Bracey.

# Southee’s 6/43 are now second-best bowling figures by a New Zealand bowler in Tests on England soil.

# James Bracey was dismissed on a duck in his debut innings.

Burns then went on to post his third Test century, second vs New Zealand. England were then restricted to 275 as Southee fittingly picked the last wicket as well to return with impressive figures of 6/43. In response, New Zealand lost Devon Conway and Kane Williamson cheaply. And at close of play, Tom Latham and nightwatchman Neil Wagner were batting on 30 and two respectively.

(The above story first appeared on LatestLY on Jun 05, 2021 11:59 PM IST. For more news and updates on politics, world, sports, entertainment and lifestyle, log on to our website latestly.com).