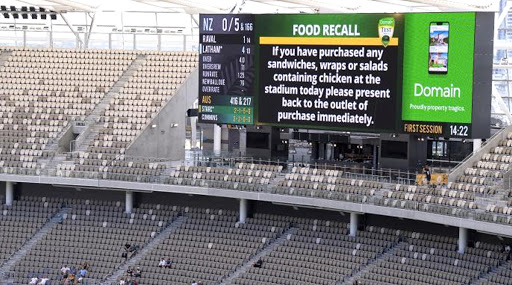 Fans who turned up for the Kiwi run chase during Day 4 of Australia vs New Zealand 1st Test at the Optus Stadium in Perth were addressed with a disturbing message on the big screen in the first session. A message was prompted on the giant screen for the fans to immediately return any chicken wraps, salads or sandwiches they have purchased during the match at the venue. This message was probably the most exciting thing that happened on Day 4 as the New Zealand batsmen are struggling out on the field. AUS vs NZ 1st Test 2019: David Warner Completes 7000 Test Runs, Becomes 12th Australian Batsman to Reach the Milestone.

A suspected food contamination storm hit the Optus Stadium in Perth when the giant screen posted a message for fans to return any chicken items they have purchased at the venue. 'If you have purchased any sandwiches, wraps or salads containing chicken at the stadium today please present back to the outlet of purchase immediately,' the warning read. This chaos happened after a staff member spotted a piece of uncooked chicken in one of the wraps. 'One of the staff saw what they thought was uncooked meat in a wrap. We’ve [since] pulled all of the wraps from the shelves.' A spokesman for the stadium said after the incident. The spokesman later announced that there had been no reports of illness amidst this mayhem. Australia vs New Zealand: Josh Hazlewood Ruled Out of Perth Test with Hamstring Strain.

Australia are looking like the favourites to win this match as New Zealand were 31/2 at the break on Day 4. Captain Kane Williamson and Jeet Raval were the two wickets lost by the Kiwis during the first session. Ross Taylor is out on the field with Tom Latham and both need to stitch a special partnership to save the Black Caps from defeat.