Glenn Maxwell Breaks a Seat With his Six During NZ vs AUS, 3rd T20I 2021; Broken Seat to Be Auctioned! 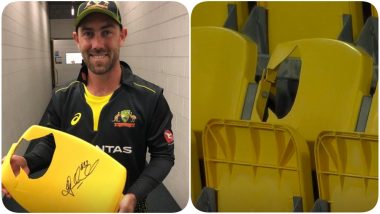 Glenn Maxwell was in the eyes of the trolls for his performance in the first two T02I games against Australia. But now in the third T20I match, against Australia in Wellington, Glenn Maxwell was on fire as he smacked 70 runs from 31 balls and led the team to a total of 208 runs for the loss of four wickets. During the course of innings eight fours and five sixes. One of his maximums was so hard that actually broke the seat in one of the stands. Following this, Shane Harmone, the CEO of the stadium requested Maxwell for his autograph. RCB Fans Elated As Glenn Maxwell Scores Quick-Fire Half-Century in New Zealand vs Australia 3rd T20I 2021.

The Australian batsman adhered to the request which was put forth by the CEO on Twitter. Harmone further confirmed that the chair will be auctioned for the local women's shelter. Maxwell signed the seat and the picture was shared on Twitter by cricket.com.au. While sharing the snaps, they also praised Maxwell's batting in the caption of the pictures. "Brutal batting from Glenn Maxwell!  Maxi took a liking to Jimmy Neesham - his 70 off only 31 balls was instrumental to Australia's win in the third T20," read the caption of the snap.

Now let's have a look at the photos shared on social media:

And this is great to see https://t.co/gTyjGX2XQG

Now, the five-match T20I series stands on 2-1 with the hosts winning a couple of games. Australian won the game by 64 runs. No sooner Glen Maxwell slammed 70 runs, RCB fans were extremely excited and shared tweets on social media about the same.

(The above story first appeared on LatestLY on Mar 03, 2021 06:21 PM IST. For more news and updates on politics, world, sports, entertainment and lifestyle, log on to our website latestly.com).