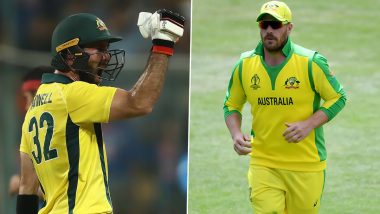 Glenn Maxwell has been left absolutely devastated after some netizens threatened Aaron Finch’s family over the Australian captain’s poor form. Amy Griffiths, Finch’s wife, recently revealed about receiving online abuse apart from threats of sexual assault and violence on social media. “I have a pretty thick skin and can generally ignore them, but recently there have been direct threats of violence and sexual assault,” Griffiths wrote while sharing screenshots of some of the nasty comments on Instagram. While the Australian skipper is yet to comment on the trolls, his national teammate Glenn Maxwell slammed the keyboard warriors. Aaron Finch’s Wife Amy Receives Online Threats of Sexual Assault and Violence Over Australia Captain’s Poor Form.

“People, this needs to stop!!! It is absolutely pathetic!! We’re all human beings, how about practicing being a half decent one!! Absolutely disgraceful!!!!” the 32-year-old all-rounder wrote on Twitter while reacting to the news. For the unversed, Finch has been in terrible form since the Big Bash League 2020-21. Leading Melbourne Renegades, the opener could only score 179 runs in 13 games at a strike rate of just above 113. Furthermore, he has scores of 1 and 12 in the on-going T20I series against New Zealand. His shortage of runs ignited some disgruntled netizens to make nasty comments, and Maxwell is indeed furious over the news.

People, this needs to stop!!! It is absolutely pathetic!! We’re all human beings, how about practicing being a half decent one!! Absolutely disgraceful!!!! https://t.co/lgVmiMHC2O

Meanwhile, Australia are 2-0 down in the five-match series against New Zealand, and they can’t afford to lose any further games. Finch’s place as the Aussie captain has also been under the scanner, and the dasher would like to silence his critics with a scintillating knock. The third T20I match takes place at the Westpac Stadium in Wellington on Wednesday (March 3).

(The above story first appeared on LatestLY on Feb 28, 2021 06:29 PM IST. For more news and updates on politics, world, sports, entertainment and lifestyle, log on to our website latestly.com).