Lucknow Super Giants slumped to their lowest total of IPL 2022 and the first below-hundred score of the tournament as Gujarat Titans emerged deserved winners. Meanwhile, check out stat highlights from GT vs LSG. 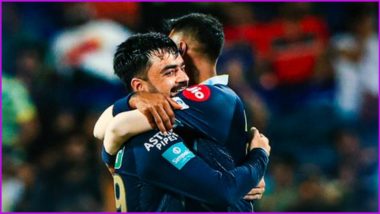 Leg-spinner Rashid Khan claimed 4/24, and Sai Kishore (2/7) and Yash Dayal (2/24) complemented his efforts as Gujarat Titans bundled out Lucknow Super Giants for 82 in 13.5 over to script a 62-run victory in a low-scoring encounter in IPL 2022 and clinched their berth in the playoffs. Rashid Khan and the Gujarat bowlers got into the act after Shubman Gill (63 not out) struck a fighting half-century to help Gujarat Titans reach 144/4 in 20 overs, a score that turned out to be enough on a pitch on which the ball was gripping and coming off slow. Gujarat Titans Become First Team to Qualify for IPL 2022 Playoffs, Beats Lucknow Super Giants by 62 Runs.

Gujarat bowlers sent down some good line and length and struck at regular intervals as Lucknow Super Giants never recovered from the blows as they slumped to a big defeat. Rashid Khan claimed his first four-fer in IPL 2022 as he claimed the wickets of Deepak Hooda (27), Krunal Pandya (5), Ayush Badoni (8) and Jason Holder (1) in 3.5 overs. IPL 2022 Playoffs Qualification Scenario Explained.

The leg-spinner from Afghanistan got into the act after pacers Mohammed Shami, who again got Lucknow skipper and his India teammate K.L Rahul (8) cheaply, and Yash Dayal sent back Quintan de Kock (11) and debutant Karan Sharma (4) to reduce Lucknow Super Giants to 33/3 in 6th over. Lucknow thus slumped to their lowest total of IPL 2022 and the first below-hundred score of the event as Gujarat Titans emerged deserved winners. Meanwhile, check out stat highlights from GT vs LSG.

# Gujarat Titans become the first team to qualify for the IPL 2022 playoffs.

Earlier, Gill waged a lone battle as other Gujarat batters found the going tough against a disciplined LSG bowling attack after skipper Hardik Pandya won the toss and chose to bat first. Pandya wanted to test his batters' ability to set up a good total. Tested they were but while Gill passed that test in flying colours, others failed to rise to the occasion.

(The above story first appeared on LatestLY on May 11, 2022 12:09 AM IST. For more news and updates on politics, world, sports, entertainment and lifestyle, log on to our website latestly.com).