Rajasthan Royals skipper Sanju Samson's team did everything right while batting on a "two-paced" wicket, putting up an imposing 188/6, built mainly on the efforts of their charismatic opener Jos Buttler (89 off 56) and the captain himself (47 off 26). 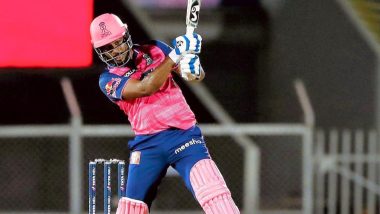 Kolkata, May 25: Rajasthan Royals skipper Sanju Samson's team did everything right while batting on a "two-paced" wicket, putting up an imposing 188/6, built mainly on the efforts of their charismatic opener Jos Buttler (89 off 56) and the captain himself (47 off 26). But little did Samson know that the Eden Gardens wicket would become a featherbed when Gujarat Titans came in to bat. The Hardik Pandya-led side smashed the required runs with ease, chasing down the total for the loss of just three wickets and with three balls to spare, and secures a place in the IPL 2022 final. GT vs RR, IPL 2022: David Miller Gives an Expression to His Smashing Knock for Titans, Says 'If It’s in the V, It’s in the Tree'.

While the Royals will get another shot at making it to the final when they play the winners of the Eliminator between Royal Challengers Bangalore and Lucknow Super Giants in Qualifier 2, Samson wasn't too happy with the wicket and he let it be known post-match. "Happy with the score. Wicket was a bit sticky. It was helping bowlers, there was swing in the powerplay. It was two-paced, and bounce was not even. I was lucky to get a few runs in the powerplay," said Samson. Rajasthan Royals React After David Miller Says 'Sorry' for Blistering Knock in IPL 2022 Qualifier 1 With Hilarious TMKOC Clip.

The 27-year-old added that with the kind of wicket his team played on after being sent in to bat first, a total of 188 was "great", but the pitch settled down when the Titans came out to bat and his bowlers were left with very limited options to defend even that kind of total. "That kind of total in that kind of conditions was great," said Samson, and added that he had the option of giving the ball to leg-spinner Riyan Parag but indicated he decided against it as the wicket wasn't assisting. "Having Riyan helps (as a bowling option), but the wicket was good to bat in the second innings. We have been playing good cricket. (A) Couple of overs and extra runs here and there. Luck plays a huge role; toss plays a huge role. Controllable is just to come back and express yourself," added Samson.

(The above story first appeared on LatestLY on May 25, 2022 05:02 PM IST. For more news and updates on politics, world, sports, entertainment and lifestyle, log on to our website latestly.com).