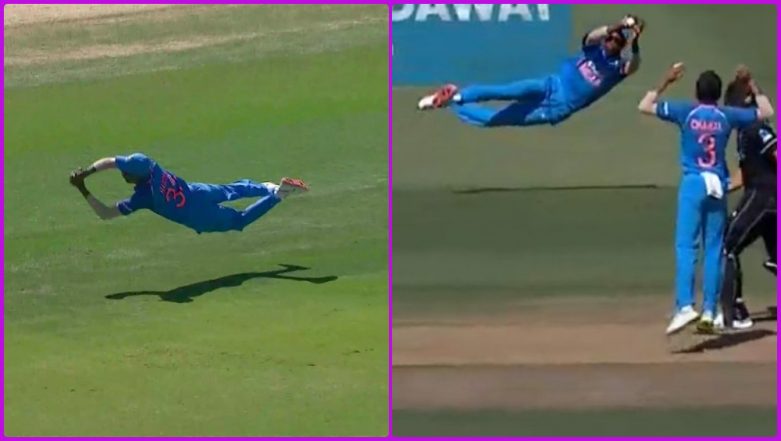 All eyes were on Hardik Pandya as he returned to Indian cricket team after his suspension was lifted by Board of Control for Cricket in India (BCCI). The all-rounder was handed suspension after he made misogynist remarks on famous celebrity talk show Koffee With Karan Season 6. After his suspension was revoked, Pandya was directed to join the team in New Zealand. Despite lack of match practice, Pandya was straightaway included in the playing XI for third ODI. And Pandya showed us why he was picked ahead of Vijay Shankar. IND vs NZ Live Score Updates.

Fielding at short mid-wicket, Pandya was instrumental in dismissing New Zealand skipper Kane Williamson. The all-rounder showed his athleticism to take a mind-blowing catch. Williamson was looking to flick the ball off Yuzvendra Chahal but found diving Pandya.

Pandya plucked the ball out of thin air while diving full length to his left to complete the catch. His acrobatic stuff left New Zealand tottering at 59 for three in 16.2 overs. Williamson, vital cog in Blackcaps’ batting, was dismissed on an individual score of 28. Check Live Cricket Score, Watch Free Telecast Details of IND vs NZ 3rd ODI Match on TV & Online.

Not only this, Pandya picked wickets of Henry Nicholls and Mitchell Santner towards the end and showed why India needs him, especially in the limited-overs cricket.

After Williamson’s dismissal, Ross Taylor and Tom Latham helped Kiwis rebuild with a partnership of 119 runs for the fourth wicket. The duo batted with intent and pulled their side out of the slump. The partnership ended when Latham was dismissed off Chahal. India comes into the match with a 2-0 lead and are looking to seal the five-match series.