Highest Individual Scores at Cricket World Cup: From Martin Guptill to Glenn Turner, Here's The List of Top-10 Batsmen Ahead of ICC CWC 2019 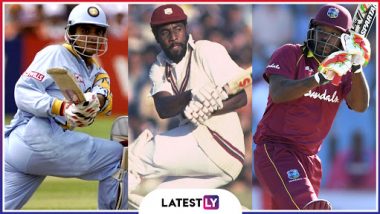 The ICC Cricket 2019 World Cup is about to hit the roads in less than two weeks. This time the tournament takes place at the home of Cricket, England along with Wales, which in recent times has seen a number of high-scoring matches. The Cricket World Cup itself is no stranger to high-scoring matches with three of tournament’s four highest totals coming in the last edition in Australia and New Zealand. History of Cricket World Cup Trophy: Facts and Evolution of Cricket’s Prestigious Title From Prudential to ICC (View Pics & Video).

These games have seen batsmen score for fun and score all around the park with many notching up unimaginable scores. From Sir Viv Richards demolishing Sri Lanka in 1987 to Chris Gayle hitting 16 sixes at Canberra, we take a look at 10 of those highest individual scores at the World Cup over the years.

The tall New Zealand opener slammed the World Cup’s highest-ever individual score in the 2015 edition of the tournament. Facing West Indies in an important quarterfinal fixture, Guptill was lucky to survive in the very first-over when Marlon Samuels dropped a dolly at square leg and the Kiwi opener made him pay with a double century. Guptill’s innings of 237 not out from 163 balls included 11 mammoth sixes and 24 boundaries. West Indies could manage only 13 more runs than what Guptill had smashed them for. ICC Cricket World Cup: Here’s a Look at Some Records and Stats Ahead of CWC 2019.

About a month before Guptill’s whirlwind, Chris Gayle had become the first player to record a double-century at the World Cup. He smashed 215 against Zimbabwe from 147 balls with the help of 10 fours and 16 maximums. But the Universe Boss was awfully out of form going into this fixture. The West Indies had lost to Ireland prior to this match. He had no century in the last 19 innings and calls for him to retire had filled social media. One such post had also got the approval of WICB President David Cameron. Gayle was also lucky to survive a tough LBW call in the fourth over and he made sure to make most it.

Gayle’s first century came in 105 deliveries. His next was in just 33 deliveries with the final 50 runs coming in 12 balls. He was out in the final delivery of the innings but only after adding a world record 372-run partnership with Marlon Samuels.

Gary Kirsten registered multiple records on February 16, 1996, when he scored the then highest individual score in World Cup history. But the biggest of them was Kirsten becoming the first South African player to score a century at the World Cup. The Proteas opener scored an unbeaten 188 off 159 deliveries that included four sixes and 13 boundaries. He could have even surpassed the highest ODI score of that time but fell one run short. South Africa won the match by 169 runs. Cricket World Cup History: Winners, Host Nations, Participating Teams and Timeline of All the CWC From 1975 to 2015.

Sourav Ganguly smashed India’s all-time highest individual score at the World Cup in 1999. The southpaw hit seven sixes and 17 fours to score 183 off 158 deliveries against Sri Lanka in the 1999 World Cup. Ganguly along with Rahul Dravid put on a then record partnership of 318 runs, with the latter hitting 145 from 129 deliveries. The Lankans folded for 216 runs handing India a big 157-run victory. Ahead of ICC Cricket World Cup 2019, Here’s a Look at Blistering Knocks by Inzamam-Ul-Haq, MS Dhoni, Sachin Tendulkar and Others at CWC Over the Years (Watch Videos).

The mighty West Indians were still recovering from their shock defeat to India in the last World Cup final. To add to their woes, the Windies lost to England in their opening match of the 1987 World Cup. They needed a victory to stay alive but were off to a worse start with Carlisle Alonza Best and Richie Richardson out on successive deliveries. In stepped skipper Viv Richards. First, he denied Ratnayeke a hat-trick, then rebuild the innings together with Desmond Haynes before tearing the Lankan bowlers apart. Richards scored his fifty off 62 deliveries and century from 97 before starting his carnage. His next 81 runs came from only 28 balls and it gave a mammoth total of 360 runs to defend. They easily did that winning the match by 191 runs.

The pint-sized power-bomb stormed Afghanistan in Perth to power Australia to its biggest ODI victory. Warner scored 178 from 133 deliveries with 19 fours and five sixes and together with Steve Smith registered the Kangaroo nation’s highest-ever second wicket partnership. As hosts of the 2015 World Cup, there was enormous pressure on Australia to win it. But after losing to rivals New Zealand in the previous match, Michael Clarke’s men were heavily criticised. Warner’s knock not just helped them to a victory but handed Australia a 275-run victory.

You talk about the 1983 World Cup and you talk about Kapil Dev. India actually had begun the 1983 World Cup with a bang. They defeated the powerhouse West Indies and Zimbabwe in their opening two matches. But lost the plot with consecutive defeats to Australia and West Indies. Then came the must-win fixture against Zimbabwe. India needed a victory, Dev won the toss and elected to bat first. But the decision proved otherwise and India lost their top-five batsman for just 17 on board. Kapil started rebuilding the innings with the lower-order and later launched a scathing attack on the Zimbabwean bowlers. He finished with 175 runs with six sixes and 16 fours as India notched up 266. They eventually won by 31 runs and what a win it proved to be. India went on to lift the World Cup.

You are an Indian batsman. You score 175 and lift the World Cup. Kapil Dev had done it in England. 28 years later, someone reminded Virender Sehwag of that magic score. The Dashing Delhi opener made sure he did in the very opening match against Bangladesh and India went on to lift the World Cup for the second time in its history. But the match was much more to Sehwag. India had been knocked out of the group stages in the previous edition in 2007. They had lost to Bangladesh and Sri Lanka. But Sehwag took the first defeat as the main reason for India’s ouster and when Bangladesh came calling again four years later, he decided to take revenge.

The right-hander scored 175 from 140 deliveries smashing 14 fours and five sixes. He could even become the first batsman to score a double century but fell short in the 48th over. India made 370 and won by 87 runs. They would later lift the World Cup on home soil after a wait for 28 years.

Craig Wishart scored just two centuries for Zimbabwe and one of them was a giant score at the 2003 World Cup. The Pool A group started with the match between Zimbabwe and Namibia, with the latter electing to field after winning the toss. It turned out to be a nightmare of a decision as Wishart playing in his home capital started with a bang. Zimbabwe lost two wickets, stitched two-century partnerships and registered 340 runs on the scoreboard. Wishart smashed 50% of those runs to finish with 172 runs not out – having hit 18 fours and 3 sixes during his 151 ball stay. ICC Cricket World Cup 2019 Schedule in PDF: Ticket Prices, Dates, Venue Details & Timetable Available for Download Online.

Many of these innings turned out to be match winners, few of them breaking various records along the way. The 2019 World Cup is also expected to witness many high-scoring totals with most teams playing revolutionary cricket. Some of these records may no longer be invincible.

(The above story first appeared on LatestLY on May 22, 2019 07:03 PM IST. For more news and updates on politics, world, sports, entertainment and lifestyle, log on to our website latestly.com).