ICC Cricket World Cup: Here’s a Look at Some Records and Stats Ahead of CWC 2019 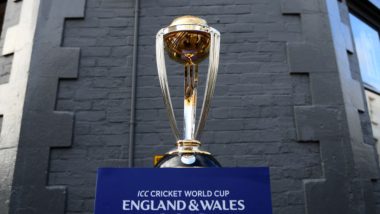 The 2019 World Cup will be played in the round-robin format and each team will face-off each other once. Top four teams after the first round will then proceed to semifinals. Meanwhile, ahead of the CWC 2019, we have listed below some of the records and stats related to the tournament.

Highest Total in CWC: Australia’s 417 for six against Afghanistan during the 2015 World Cup is the highest team total in the tournament’s history. Only three teams have crossed the 400-run mark in the World Cup. India and South Africa apart from Australia. South Africa have scored over 400 twice. What is Cricket World Cup and How The Most Prestigious Cricketing Event Evolved From Prudential to ICC WC?.

Lowest Total in CWC: Canada were bundled out for just 36 runs during the 2013 World Cup against Sri Lanka. Interestingly, Canada also holds the infamous record of the second-lowest total in the World Cup. During the 1979 edition, Canada were bowled out for 45 runs against England.

Biggest Win in CWC: After Australia scored record 418 during the 2015 World Cup, they defeated Afghanistan by massive 275 runs. Afghanistan were bowled out for 142 runs.

Most Runs in CWC: Former India batsman Sachin Tendulkar holds the record for most runs in the World Cup. In 45 matches, Tendulkar scored 2278 at an average of 56.95. Tendulkar scored six centuries and 15 half-centuries in World Cup matches. Cricket World Cup History: Winners, Host Nations, Participating Teams and Timeline of All the CWC From 1975 to 2015.

Highest Individual Score in CWC: During the 2015 World Cup, Martin Guptill smashed unbeaten 237 runs against West Indies at Wellington. It is the highest score by a batsman in World Cup matches. Chris Gayle with 215 runs is second on the list.

Most Centuries in CWC: Sachin Tendulkar has scored the most number of centuries in World Cup matches. The former Indian batsman has six centuries against his name. Former Sri Lankan captain Kumar Sangakkara and Australian captain Ricky Ponting share the second-spot each with five centuries.

Best Bowling Figures in CWC: The aforementioned 7/15 figures of McGrath achieved during the 2003 World Cup are the best figures in the tournament’s history. McGrath’s team-mate Andy Bichel is on the second spot with 7/20. Tim Southee and Winston Davis also picked a seven-wicket haul.

Most Dismissals in CWC: Former Sri Lankan Kumar Sangakkara holds the record of most dismissals in World Cup matches. He has 54 dismissals against his name with 41 catches and 13 stumpings.

(The above story first appeared on LatestLY on May 18, 2019 01:36 PM IST. For more news and updates on politics, world, sports, entertainment and lifestyle, log on to our website latestly.com).