Ahead of ICC Cricket World Cup 2019, Here’s a Look at Blistering Knocks by Inzamam-Ul-Haq, MS Dhoni, Sachin Tendulkar and Others at CWC Over the Years (Watch Videos) 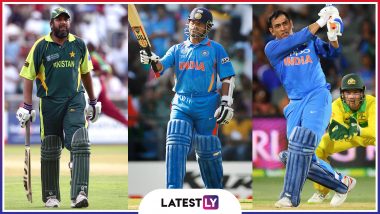 The ICC Cricket World Cup 2019 is scheduled to begin from May 30, 2019. The 12th edition of CWC will be held for the 5th time in England and Wales. Ahead of ICC CWC 2019, let us explore some match-winning knocks from cricket's mega tournament featuring Inzamam-Ul-Haq, Sachin Tendulkar, MS Dhoni and others which for centuries will be remembered. ICC Releases Official World Cup 2019 Theme Song ‘Stand By’, By LORYN and Rudimental (Watch Video)

A handy knock by a batsman can change the whole course of the match. A fine inning by a player can change fortune for the team. I will be speaking here about innings which bought the team to victory from the claws of defeat. Whether a batsman scores a 50 or a 100, it is only worthy if it helps their side win. Ahead of ICC Cricket World Cup 2019, Here’s 5 Disheartening Moments From Cricket’s Mega Tournament That Made Fans Emotional (Watch Videos)

This inning by Inzy came for Pakistan team at the right time when his team desperately needed it. This quick-fire knock by Inzamam helped Pak side win the semi-final, as they went on to win the CWC 1992. When 22 years old young Inzamam came out to bat, Pak was 140/4 with 123 runs required from 90 balls as NZ posted a total of 262/4 in 50 overs. Inzamam had the experience Javed Miandad on the opposite end, however, out of nowhere the unknown Inzy that time started smashing the balls all around the park which took the match away from New Zealand. Inzamam scored 60 from 37 balls as he got run out when 36 runs were required for victory. After his dismissal, Miandad and Moin Khan ensured that they take the side home comfortably.

Sri Lankan players today can derive inspiration from this match-winning ton by Arvinda de Silva. Arvinda de Silva scored an unbeaten 107 in this match and came to bat when his team was in trouble at 23/2 while chasing the target of 242 runs. He was well supported by skipper Arjuna Ranatunga in the end who played a fine knock of 47 not out. Sri Lanka defeated Australia in this final match at Gadaffi Stadium in Lahore by chasing down the target in 47th over to become World Champions for the first time. ICC Cricket World Cup 2019 Schedule in PDF: Ticket Prices, Dates, Venue Details & Timetable Available for Download Online.

3. Steve Waugh inning of 120* vs South Africa at ICC WC 1999 to take Australia into the Semi-final

In the crucial super-six stage game of SA vs AUS, where South Africa had already qualified for semis, Aussies had to win this match to enter the semi-final stage. Australia were 48/3 and was drawn out of the competition when Waugh came out to bat. He batted well along with Ricky Ponting to take his team close to the total. Ponting got out at 69, however, the skipper Steve Waugh ensured that he take his team home. South Africa might have lost their World Cup chance when Herschelle Gibbs dropped Waugh at the score of 69 while throwing the ball for celebration. As Waugh took Australia into the semis where they again faced South Africa in which Lance Klusener and Allan Donald messed up in the end to give a tie which led Aussies into the final considering their better Net Run Rate and points.

4. Sachin Tendulkar entertaining knock of 98 against Pakistan at ICC CWC 2003

This can be considered as one of the best knocks by the little master, as it helped India chased down the target of 273 runs with ease. Tendulkar scored a quick 98 runs from 75 balls in the Super-Six game of CWC 2003 at the SuperSport Park in Centurion. His inning included 12 fours and a six.

This was the highest ever chase in the World Cup final, where India achieved the target of 275 runs. Dhoni took a brave move in this match as a skipper where he pushed himself ahead of Yuvraj Singh who had a better tournament than Dhoni. When MSD came out to bat 161 runs were required from run a ball and match that time was in favour of Sri Lanka. However, Dhoni ensured that he wins the trophy for India after a gap of 28 years. He played his trademark shot for a six when India needed four runs for victory. Click here to view the video of the match-winning shot by Dhoni.

The ICC CWC 2019 tournament will feature only MS Dhoni from the above list and we can expect a similar performance from him in the upcoming World Cup tournament. The final of WC 2019 will be played at Lord's, London on July 14, 2019.

(The above story first appeared on LatestLY on May 19, 2019 02:07 AM IST. For more news and updates on politics, world, sports, entertainment and lifestyle, log on to our website latestly.com).