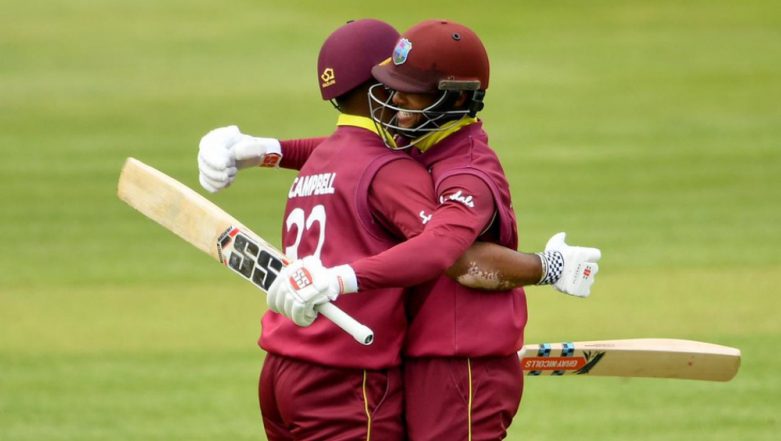 West Indies pair of Shai Hope and John Campbell registered the highest opening partnership in the ODIs (One-Day Internationals) and created a new. The duo went Pakistan Pakistan’s opening pair of Fakhar Zaman and Imam ul Haq, who had previously scored 304 against Zimbabwe. The Windies openers achieved the feat against Ireland at the Castle Avenue in Dublin during the opening match of tri-series featuring Bangladesh as well. West Indies vs Ireland Live Cricket Score 1st ODI Match.

Fakhar and Imam’s 304 for the first wicket came against Zimbabwe in 2018. And now, Hope and Campbell are the new record holders. Hope and Campbell scored finished with individual scores of 170 and 179 runs respectively and put on a huge opening stand.

The pair had added 365 in 47.2 overs to create the new record. Ireland won the toss and then put Windies to bat first. The listing side openers made good use of the relatively shorter boundaries and thrashed bowlers all around the park. Live Cricket Streaming of Ireland vs West Indies 2019: Check Live Cricket Score, Watch Free Telecast of IRE vs WI 1st ODI on TV & Online.

Interestingly, the Ireland bowling a few days back at The Village in Malahide had England bowlers in all sorts of trouble. However, against Windies, the Irish bowlers appeared hapless.

Hope and Campbell become only the second opening pair to notch 300 or more for the opening wicket. With Fakhar and Imam at the second place now, Sri Lanka’s former opening pair of Upul Tharanga and Sanath Jayasuriya, who added 286 against England in 2006, drop to third place.

David Warner and Travis Head with 284 runs against Pakistan are at fourth spot followed by Quinton de Kock and Hashim Amla with unbeaten 282 against Bangladesh at the fifth place.