India vs Sri Lanka, 3rd T20I 2020, Key Players: Jasprit Bumrah, Angelo Mathews, Navdeep Saini and Other Cricketers to Watch Out for in Pune 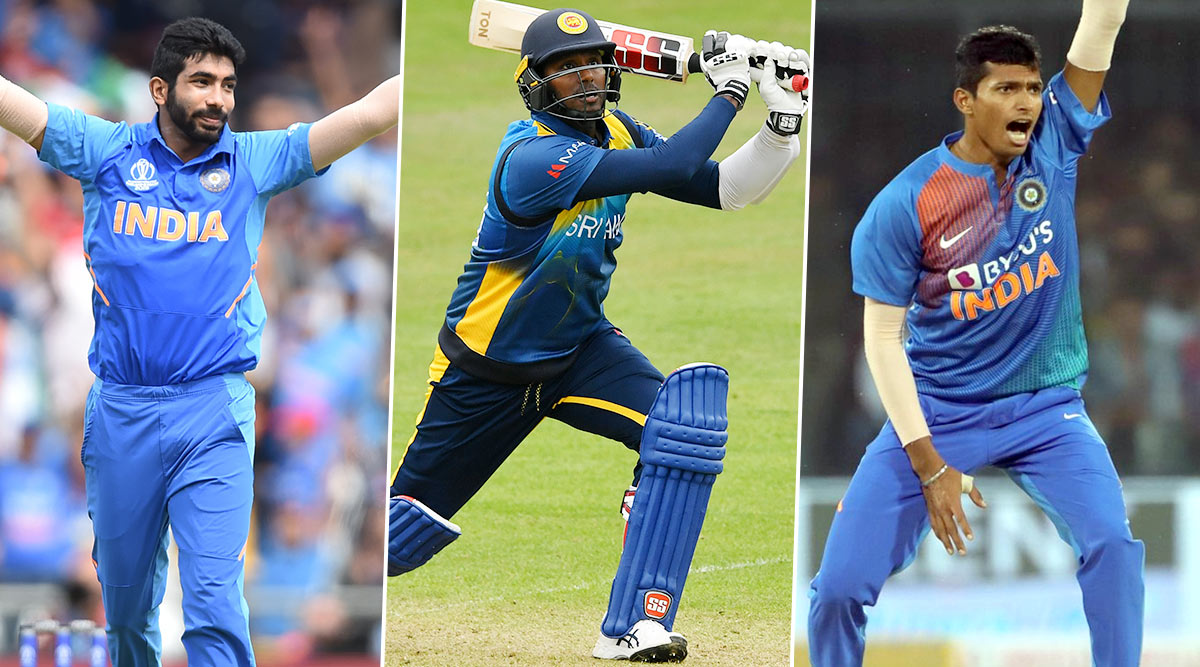 India will chase successive T20I series victory when they a depleted Sri Lanka side in the 3rd and final Twenty20 International match of the three-match series. India vs Sri Lanka 3rd and final T20I match will take place at the Maharashtra Cricket Association Stadium in Pune on January 10, 2020 (Friday). India had little in the 2nd T20I match where they sealed a 7-wicket victory to take an unassailable 1-0 lead in the series. Virat Kohli and his men started the New Year with a bang and are well on track to complete a first series win in the year 2020. The same, however, cannot be said about Sri Lanka who with a defeat at Pune could be down to their fourth consecutive T20I loss and draw another blank after humiliation in Australia. Take a look at some key [players from both teams ahead of the Pune T20I encounter. India Vs Sri Lanka, Cricket Score 3rd T20I Match.

Jasprit Bumrah returned with an economy of 8 in his first match after a return from injury. Bumrah, India’s premier fast bowler, returned with figures of 1 wicket from 4 overs in Indore and will be eager to improve his returns in the 3rd and final T20I match against Sri Lanka before the Australia tour. His younger compatriot, Navdeep Saini was the star in the 2nd T20I match and will look to continue the good run. Saini returned with figures of 4/18/2 from Indore but more than the wickets, it was his pace, length and ability to fox the batsmen with bounce that impressed everyone. At 23, Saini is already touted as one of India’s best future fast bowlers and his 7-match international career would suggest the same. India vs Sri Lanka T20I Head-to-Head Record.

Sri Lanka, on the other, will have eyes on everyone. No one in their batting line-up – apart from Kusal Perera – showed quality in the 7-wicket defeat at Indore. Sri Lanka’s bowling have struggled too but it has been their batsmen’s inability to set respectable targets or successfully chase them down that has hurt them most. Angelo Mathews is in contention to be included following the injuries to Oshada Fernando and Isuru Udana. Mathews averages 78 with the bat against India and will be important to this side. Meanwhile, take a look at some players that could decide the match and be the difference in the 3rd T20I match at Pune. India vs Sri Lanka 3rd T20I 2020: Navdeep Saini vs Avishka Fernando & Other Exciting Mini Battles.

Bumrah’s return to international cricket after a three-month injury lay-off wasn’t best to his standards or the level he has set for himself. But you can never take the eyes of India’s third highest T20I wicket-taker. Expect Bumrah to come out firing after a quiet day in the 2nd game at Pune.

He was the bowling star – along with Shradul Thakur – in India’s 5-wicket win at Indore. Saini’s fiery spell at the start set the tone for India’s successful outing after winning the toss and opting to chase. Saini returned with figures of 4/18 in the 2nd T20I match and will once be expected to start the proceedings for India with the ball. His consistency allows India to keep Bumrah more for death.

KL Rahul will – more than Shikhar Dhawan – be the player to watch out for after another brilliant display with the bat for India. But Dhawan, who until the Bangladesh T20I series, was India’s first choice to open alongside Rohit Sharma – a spot KL Rahul might have snatched for himself at least in the T20I cricket.

But Dhawan hasn’t lost the battle yet and will be afforded another opportunity in Pune. He recently said he is free-minded, refreshing and happy within. But a 110.34 strike rate when most of his teammates were hitting the 140-150s showed otherwise. Gone are the days when Rohit fired and Dhawan stabilised or vice-verse, India’s T20I plans have changed now. Dhawan must fire or be fired.

Sri Lanka’s biggest name on paper – other than Lasith Malinga – wasn’t part of the playing XI at Indore. But is certain to return as a replacement for the injured Isuru Udana. Mathews is Sri Lanka’s most experienced batsman and is guile enough with the ball. His captain, despite Mathews’ age, considered him as this team’s best finisher and Mathews on return to Sri Lanka T20I squad after 16 months will be eager to show some of them.

The captain of this young and inexperienced team. Malinga was taken to tatters by India in the 2nd T20I match. His yorkers aren’t as effective as they were in his prime but Malinga is still one of the world’s best death bowler. With figures of 41 runs in 4 overs, Malinga was Sri Lanka’s most expensive bowler at Indore and will be eyeing a return to form at Pune.

The tides favour India and that is not surprising to any. But Sri Lanka are an unpredictable side. They completed rampaged world No 1 Pakistan in their own backyard and know how important will a win at Pune be. Sri Lanka can look to Pune and the last time they played there for hope.