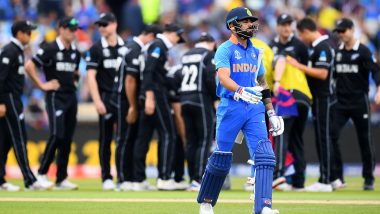 India did not help Pakistan to enter Semis

Saddest day for India at WC

Everyone: "Kal ho naa ho" was the saddest movie I ever watched.

While Rohit Sharma edged a ball outside off to Matt Henry's delivery, Virat Kohli was dismissed by same Kiwi pacer through LBW. Rahul, who smashed his World Cup debut century in the last match against Sri Lanka, was dismissed by world number two ODI pacer Trent Boult. The right-handed Indian opener was caught behind by keeper Tom Latham.

Meanwhile, India are chasing 241-run target in ICC CWC 2019 semi-final match against New Zealand, which was resumed on Wednesday after being affected by rains on the Tuesday.

(The above story first appeared on LatestLY on Jul 10, 2019 04:51 PM IST. For more news and updates on politics, world, sports, entertainment and lifestyle, log on to our website latestly.com).