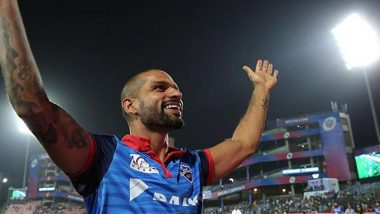 As the Indian Premier League (IPL) 2020 is set to get underway on September 19 in UAE, many prominent cricketers are raring to take the field again and Shikhar Dhawan is no exception. The Delhi Capitals opener recently took to Instagram and gave the message that he's ready to showcase his blitzes in the tournament. The southpaw, however, also mentioned that he'll miss the presence of fans in the stadium but the fact will not stop him from piling up runs. Fans were ecstatic when they came across the Gabbar's post as they filled the comment section with love. Delhi Capitals Captain Shreyas Iyer Issues Warning to Other Teams, Says 'We're Coming.'

"Ready for the IPL fever 🙌 Going to miss our fans in the stadium but can't wait to get onto the field and entertain," wrote the 34-year-old cricketer while sharing an old picture of him in the DC jersey. Dhawan, who was the fourth-highest run-scorer of IPL 2019 with 521 runs, played a crucial role in guiding his side to the play-offs. This time, however, the veteran must be aiming to guide DC to their maiden title. Meanwhile, have a look at Dhawan's latest post. Ajinkya Rahane Says He is Looking Forward to New Beginnings.

With the tournament taking place in UAE, all the teams will have to tackle a different challenge. The pitches of Abu Dhabi, Dubai and Sharjah are known to favour the spinners while the boundaries are also on the larger side. Shikhar Dhawan, however, boasts off an impressive record in UAE. In the 2018 Asia Cup, the southpaw scored 342 runs in five matches which also included two centuries. Well, the swashbuckling batsman certainly has to replicate his heroics in order to guide Delhi Capitals to their maiden title.

(The above story first appeared on LatestLY on Aug 06, 2020 04:04 PM IST. For more news and updates on politics, world, sports, entertainment and lifestyle, log on to our website latestly.com).