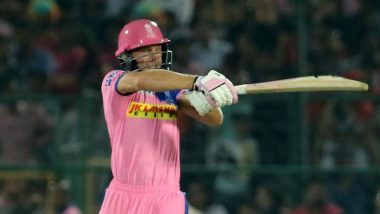 After a long gap of three months, the cricketing season in England will begin from July 8, 2020.  Like any other cricketer, even Jos Buttler has been looking forward to the cricketing season to begin soon. In fact, in an interview, the Rajasthan Royals player even went on to say that he is missing the IPL 2020 season. The coronavirus has actually sent the cricketing schedule for a toss. With lockdown being imposed in all countries to break the chain of the virus, the sporting actions had come to grinding halt. IPL 2020 Update: BCCI Official Laughs Off Rumours of India Premier League 13 to be Shortened to Accommodate Asia Cup 2020.

This obviously includes the IPL 2020 which was about to start on March 29, 2020, but was further pushed to April 15, 2020. But back then India had a lockdown imposed in the country and then the IPL 13 had been called off for an indefinite period of time. Now, talking about Jos Butler, too like the fans is missing the IPL. Rajasthan Royals shared the video of the same on their social media accounts.  Check it out below;

Eyeing the return of cricket and missing the IPL. 😁

Talking about the renewed schedule of the Indian Premier League, the BCCI is looking out for the window of September-November for conducting the 13th season of the tournament. BCCI President Sourav Ganguly has also asked the respective state boards to start preparing for the upcoming season of the IPL. There were reports that the BCCI would cut short the tournament in order to accommodate the Asia Cup 2020 but an official from the board has refuted the rumour.

(The above story first appeared on LatestLY on Jun 21, 2020 08:05 PM IST. For more news and updates on politics, world, sports, entertainment and lifestyle, log on to our website latestly.com).