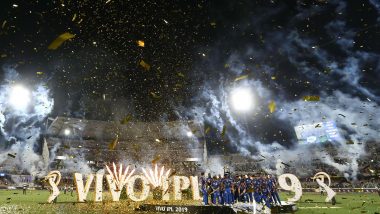 For a few days that the organisers of the Indian Premier League could be forced to shorten the tournament to accommodate the schedule of the Asia Cup 2020 which was originally supposed to be held in Pakistan. As per the recent piece of news, Sri Lanka is all set to host the tournament. Responding to the rumours of shortening the tournament, the BCCI official on a state of anonymity laugh off the piece of news and said that isn’t true. "The IPL 2020 will not be trimmed for any other tournament," said a BCCI official privy to the developments associated with the IPL 2020. IPL Governing Council to Review Its Sponsorship Deals After Border Clash with China.

He further said that the BCCI is closely watching out the health conditions and is looking to conduct the Indian Premier League 13 in September 2020. The official further said that the players' health and safety are of utmost concern for the board. The official further revealed that it was due to the safety concerns that they had to cancel the tournaments against Sri Lanka and  Zimbabwe.

The BCCI was recently in the news for reviewing te Chinese sponsorship of VIVO after outrage against Chinese products in the country. The outrage happened after the recent India China standoff at the Galwan Valley which claimed the lives of 20 Indian soldiers. Harbhajan Singh also said that the IPL could get many other sponsors if not VIVO as IPL in itself is a bigger brand. In the same interview, Bhajji confirmed that he will never endorse Chinese products.

(The above story first appeared on LatestLY on Jun 20, 2020 11:20 PM IST. For more news and updates on politics, world, sports, entertainment and lifestyle, log on to our website latestly.com).