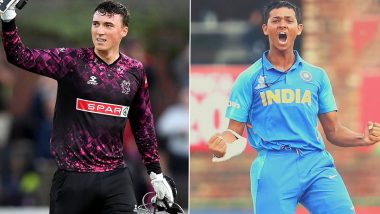 The Indian Premier League came into inception on the resolve to promote young cricketers and give them a platform to rub shoulders with some of the biggest names in cricket. Over the time, the league has turned into a tournament where there is plenty of clash inflow but it has stuck true to its promise of promoting youngsters. Every year some of the most unknown entities become stars courtesy their superlative performances on the pitch. While this may not guarantee immediate breakthrough in international cricket but we see the selectors often giving weightage to IPL performances when selecting teams for T20 games. Ahead of the IPL 2020 season, we take a look at some of the young names that will feature. IPL 2020: Imran Tahir, MS Dhoni and Other Oldest Cricketers Set to Take Part in Indian Premier League Season 13.

Yashasvi Jaiswal – 18 years – The Rajasthan Royals recruit has been making waves in domestic cricket playing for Mumbai and his performance for India Under-19 were also revered by cricket fans. RR is known for nurturing young cricketers and Yashasvi Jaiswal will have no problem settling in immediately. He has also earned a whopping 2.4 crore from his move to Rajasthan Royal.

Abdul Samad – 18 years – Abdul Samad has been picked up by Sunrisers Hyderabad where he can be an option in the middle order. Although it is highly unlikely he will be part of the team from the beginning, the talented Jammu and Kashmir batsman is a very good squad player to have. IPL 2020 Captains List: From MS Dhoni to Virat Kohli, Check Out Skippers of All 8 Teams in Indian Premier League 13.

Akash Singh – 18 years – An integral member of the India Under-19 squad, Akash Singh is bound to learn from some of the best in the business like Andrew Tye. He provides an alternate option in pace attack and considering his discipline when it comes to maintaining line and length, he should get games under his belt.

Ravi Bishnoi – 19 years – We have seen the aggressive spinner performing to his best in the Under-19 World Cup for India and that has helped him earn a 2 crore deal with Kings XI Punjab. In a team like Punjab where there is often lack of genuine match winners, Ravi Bishnoi can find instant success if he keeps hold of his nerves in UAE.

Ishan Porel – 21 years – A key player for Bengal in the domestic league where he helped his team reach the finals of the Ranji Trophy, Ishan Porel has earned a 20 lakh deal at Kings XI Punjab. He will be a good deputy to stalwarts like Mohammed Shami and Sheldon Cottrell.

Tom Banton – 21 years – He is only 21 and has become an established star for England and will be eager to replicate the success with Kolkata Knight Riders, who have snapped him for 1 crore. A powerful hitter known for his unorthodox shots, Tom Banton can be a force to reckon with on the flat batting decks in UAE.

It is always a wonderful sight watching young cricketers showcasing their talent at the biggest stage. The 2020 IPL has several of them, buzzing to help their side clinch the trophy.

(The above story first appeared on LatestLY on Sep 22, 2020 07:21 PM IST. For more news and updates on politics, world, sports, entertainment and lifestyle, log on to our website latestly.com).