Legendary India cricketer Sunil Gavaskar believes that Rahul Tewatia's hard-hitting and pulverising knocks in IPL 2022 for Gujarat Titans have got to do with him smashing West Indies pace bowler Sheldon Cottrell in IPL 2020 in Sharjah. 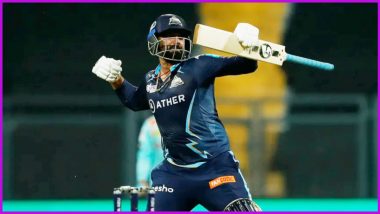 Mumbai, May 3: Legendary India cricketer Sunil Gavaskar believes that Rahul Tewatia's hard-hitting and pulverising knocks in IPL 2022 for Gujarat Titans have got to do with him smashing West Indies pace bowler Sheldon Cottrell in IPL 2020 in Sharjah. Tewatia, then playing for Rajasthan Royals, turned the run chase on its head when he smashed five sixes in Cottrell's 18th over as he stunned Kings XI Punjab, helping his team chase down 224. Gavaskar feels that the whirlwind innings in 2020 had given the all-rounder the confidence to blast any bowler into submission. On April 30 against Royal Challengers Bangalore, it was due to his unbeaten 43-run effort (25 balls) that Gujarat Titans won the nail-biter by six wickets with only three balls remaining. IPL 2022: Mitchell Marsh’s Brain Fade Against LSG Has DC Coach Ricky Ponting Fuming.

"That assault on Sheldon Cottrell in Sharjah gave him the belief to do the impossible and the confidence that he belongs here. We saw the impossible (he did with the bat) the other day as well (against RCB). There's no twitching or touching the pads (which shows a batter's nervousness) when he bats in the death overs. He just waits for the ball to be delivered and plays his shots. He's got all the shots in the book, but most importantly his temperament to stay cool in a crisis is brilliant," said Gavaskar on Star Sports. Gavaskar said he had nicknamed the 28-year-old cricketer the 'ice-man' and lauded Tewatia's ability to remain unruffled during tense moments. KKR vs RR, IPL 2022: Timely Partnerships, Tight Bowling Help KKR Beat Rajasthan.

"Reason why (I) call him the ice-man is because he just stands there (at the crease) and shows no signs of shrugs or whatever. He's composed; he's anticipating the deliveries and knows which shots to play. In his mind, he's ready that if the ball is (landing) there, he's going to play his favourite shot. And when he middles (the ball), it's always a six. That's what makes him the ice-man because he's not ruffled at all (with the situation)," added Gavaskar.

(The above story first appeared on LatestLY on May 03, 2022 03:51 PM IST. For more news and updates on politics, world, sports, entertainment and lifestyle, log on to our website latestly.com).