Partnerships win matches, goes the saying in cricket. Two good partnerships for one team and only one for another made all the difference when Kolkata Knight Riders defeated Rajasthan Royals by seven wickets in Match 47 of IPL 2022 at the Wankhede Stadium on Monday. 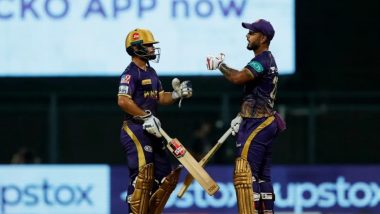 Mumbai, May 3: Partnerships win matches, goes the saying in cricket. Two good partnerships for one team and only one for another made all the difference when Kolkata Knight Riders defeated Rajasthan Royals by seven wickets in Match 47 of IPL 2022 at the Wankhede Stadium on Monday. Thus partnerships and some tight bowling by the Kolkata Knight Riders bowling unit -- particularly Sunil Narine (who conceded seven runs in two overs in middle overs) while Umesh Yadav and Anukul Roy too gave away runs in single digits in two overs -- meant Rajasthan Royals fell short by at least 15-20 runs. KKR vs RR, IPL 2022: Shreyas Iyer Lauds Sunil Narine, Umesh Yadav and Rinku Singh After Win over Rajasthan.

Asked to bat first on a strip that was being used for the second successive day after the match between Delhi Capitals and Chennai Super Kings, the pitch was slow and batting was slightly difficult. On such a pitch, Rajasthan Royals had the highest partnership of 48 runs -- for the second wicket between Jos Buttler and Sanju Samson. Rajasthan were 62/2 at the halfway stage and with skipper Sanju Samson looking in good touch and with good hitters like Riyan Parag and Shimron Hetmyer yet to come, in the perfect position to accelerate and set up a challenging target. KKR vs RR, IPL 2022: Rinku Singh Reveals He Has Been Waiting for Last Five Years to 'Get a Chance'.

However, that did not happen. Though skipper Samson kept one end going, the Royals lost Karun Nair (13), and Riyan Parag (19) went back cheaply. Samson also could not accelerate even though he was the highest scorer for Rajasthan at 54. He completed his 50 off 38 balls, and he could manage only four runs off the next 11 deliveries. Some tight bowling by Kolkata Knight Riders too made things difficult for Rajasthan -- Sunil Narine conceded only seven runs in the eighth over; Anukul Roy gave away four runs in over No 10; Sunil Narine gave away only four and three runs in overs 12th and 18th respectively and in between Umesh Yadav bowled a 5-run over in the 15th that strangled Rajasthan Royals' scoring and they were restricted to 152/5 in 20 overs.

Chasing such small targets is quite tricky and with Rajasthan Royals bowlers fighting it back with some tight overs, KKR skipper Shreyas Iyer (34) and Nitish Rana (48 not out off 37) shared a 60-run partnership for the third wicket and then Rana raised an unbeaten 66-run partnership with Rinku Singh (42 not out) which in the end made all the difference for KKR.

(The above story first appeared on LatestLY on May 03, 2022 02:12 PM IST. For more news and updates on politics, world, sports, entertainment and lifestyle, log on to our website latestly.com).