In 2017, Kieron Pollard scored 17 at a run a ball as Mumbai Indians set out to chase 179 against Kolkata Knight Riders. Sanjay Manjrekar criticised Pollard on air. Pollard responded on social media. 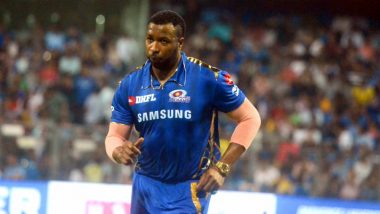 Mumbai Indians rode on the brilliance of the Pandya brothers, Krunal (4-0-24-3, 11 in 6 balls) and Hardik (29 not out in 11), and Nitish Rana (50 in 29) to beat Kolkata Knight Riders in a 2017 Indian Premier League match at the Wankhede Stadium. One person who struggled during the chase of 179 was Kieron Pollard. His run-a-ball 17 took the steam out of the Mumbai innings, leaving them to chase 61 in 23 balls when he departed. ‘Pollard does not have the brains to play early in the innings,’ commented an annoyed Sanjay Manjrekar on air. IPL Controversies- Part 24: Harsh Goenka vs MS Dhoni During Indian Premier League 2017.

<Unfortunately, news of Manjrekar’s comments reached Pollard, who immediately took to Twitter to respond, not once or twice but thrice: First, ‘@sanjaymanjrekar u feel any positive can come out of your mouth bcuz u get pay to talk u can continue with your verbal diarrhea.’

Then, ‘Do you know how I get big so.. about BRAINLESS.. words are very powerful .. once it leaves u can't take it back.. sins of parents fall on...’

Tino Best, in England at that point of time, became of the incident. He voiced his support for Pollard on Twitter, tagging Kevin Pietersen: ‘@sanjaymanjrekar how can u say @KieronPollard55 don’t have the brains to bat at 3 @KP24 why y’all always beating us down BS GTFOH with that.’

(The above story first appeared on LatestLY on Sep 21, 2021 08:38 PM IST. For more news and updates on politics, world, sports, entertainment and lifestyle, log on to our website latestly.com).