One of the biggest misses for India in the Virat Kohli-Ravi Shastri era would always be the lack of an ICC title but Kapil Dev said that despite it, the national team played a phenomenal brand of cricket in the last five years. India had an unceremonious exit at the T20 World Cup 2021 as they failed to qualify for the semifinals. 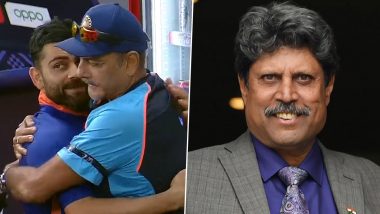 Former India captain Kapil Dev evaluated the growth of Indian cricket under Virat Kohli and Ravi Shastri. The historic Kohli-Shastri era in Indian cricket ended with India getting eliminated from the Super 12 stage of the T20 World Cup 2021. Despite the country failing to win any ICC title in this period, Indian cricket saw a meteoric rise where the team started winning Test matches consistently, especially in overseas conditions. Kapil Dev shared a report card of the Indian team's performance under this duo and said that though it was a job well done, 'the big thing lacking is an ICC trophy.' Virat Kohli Shares Aesthetic Pictures on Social Media, Looks Extremely Dope and Stylish in His Latest Airport Look! (See Photos)

"I think both have done a super job. I understand that they could not win India a major trophy but if we look at the last five years, since Kohli took over, there has been nothing lacking. The big thing lacking is an ICC trophy. Apart from that, India have won in Australia, England… wherever they have travelled, they have beaten the other team," he said, as quoted by Uncut. While talking about India's dismal show in the T20 World Cup 2021 he opined, "Reaching the World Cup knockouts is also a huge deal. I think after the 2007 World Cup in West Indies, this T20 World Cup is where it felt that India were disappointing. Had they reached the top 4 and then lost, it is understandable. But if you don't reach the top 4, there will be criticism." Sourav Ganguly Takes Over As the Chairman of ICC Men’s Cricket Committee, Replaces Anil Kumble on Tuesday

Though India lacked an ICC title, one can't count out the fact that the team achieved memorable victories in overseas conditions. Under Virat Kohli, the T20I side whitewashed New Zealand 5-0 in 2020, won series' in Australia and England as well. This era also saw India become a heavyweight in Test cricket by winning matches and series away from home, in countries like Australia.

(The above story first appeared on LatestLY on Nov 17, 2021 02:17 PM IST. For more news and updates on politics, world, sports, entertainment and lifestyle, log on to our website latestly.com).