Krunal Pandya Resumes Outdoor Training, Says 'Feels Good to Be Back out There Again' 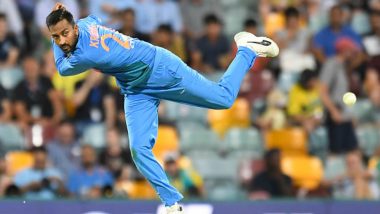 Vadodara, June 30: India all-rounder Krunal Pandya on Tuesday resumed outdoor training after more than three months. "Began my day with a run out on the field.. feels good to be back out there again," Krunal said in a tweet from his handle. The Baroda cricketer who is the elder brother of Hardik, has played for India in 18 T20 Internationals till date. Few days back, star India opener Rohit Sharma said he hit the greens and as per his social media post India's white-ball vice-captain had his first outdoor training session post relaxation of COVID-19 lockdown.

"Good to be back on the park getting some work done felt like myself after a long time,"Rohit wrote in an Instagram post. Rohit last played competitive cricket during the T20 series in New Zealand before a hamstring injury ruled him out of action. Krunal Pandya Picks Cristiano Ronaldo Over Lionel Messi As His Favourite Footballer (See Post).

Began my day with a run out on the field.. feels good to be back out there again 💪 pic.twitter.com/JsWZRJIms7

Rohit recently completed 13 years on the international stage and the opener took to social media to not only thank his fans and loved ones for always supporting him, but also spoke about how he has lived a dream. India Test specialist Cheteshwar Pujara too had begun batting in the nets in his native Rajkot.

Meanwhile, India skipper Virat Kohli on Tuesday went down the memory lane and recalled the Adelaide Test during India's tour of Australia in 2014 which according to him will always remain an important milestone for the team.

In the first Test of the Border-Gavaskar Trophy played from December 9-13, Team India gave a tough fight to Michael Clarke and his team. However, they were not able to cross the line despite Kohli scoring twin centuries in both the innings of the Test match.

"Throwback to this very special and important Test in our journey as the Test team that we are today. Adelaide 2014 was a game filled with emotion on both sides and an amazing one for people to watch too," Kohli said in an Instagram post along with a photo from the game.

(The above story first appeared on LatestLY on Jun 30, 2020 07:57 PM IST. For more news and updates on politics, world, sports, entertainment and lifestyle, log on to our website latestly.com).