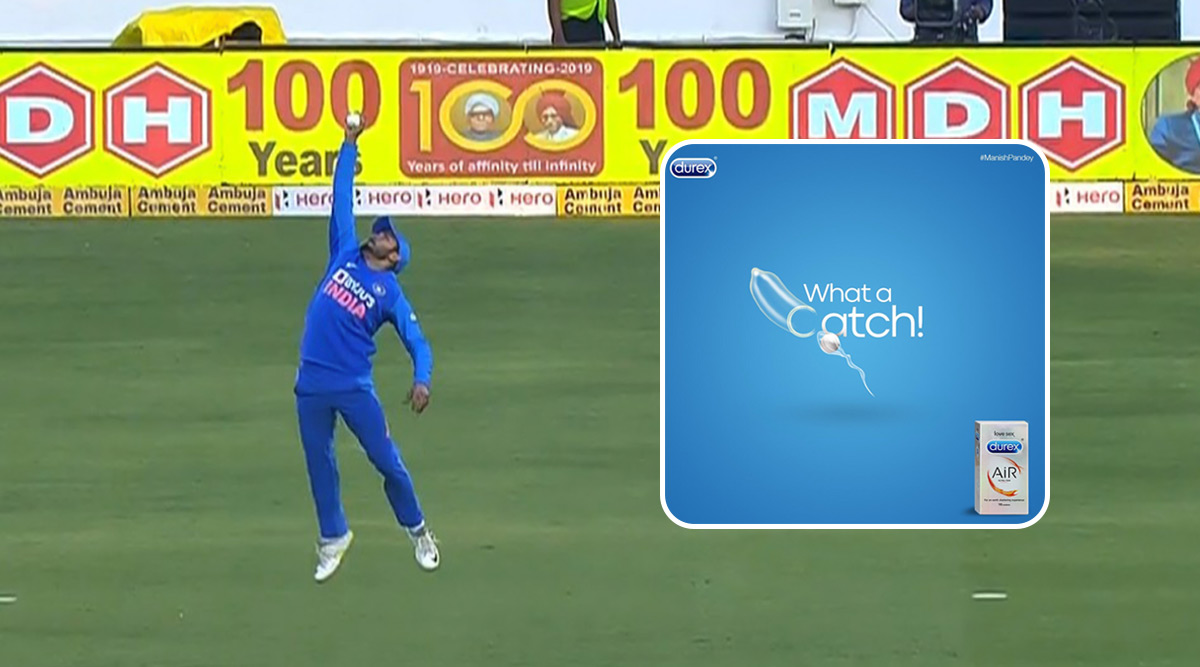 Manish Pandey’s one-handed stunner in the 2nd India vs Australia ODI match set the internet on fire. Such spectacular was the catch – and so important – given the match situation that fans couldn’t stop praising 30-year-old for his outstanding effort. At one point, Pandey’s one-handed effort topped the Twitter charts with netizens all over the player for his stunning take. Durex Condoms, renowned for their creatives and catchy promotions, soon joined the party with another brilliant promotional tweet. India’s 36-run victory to level the three-match ODI series also added to their venture of promoting the product through Pandey’s catch. Watch Manish Pandey Pull-Off One-Handed Stunning Catch.

“Even the strongest players get caught in the Air!” said the caption on an image by Durex India. The image read “What a catch” with a brilliant caricature accompanying it. Durex India’s creative certainly got the fans talking with many praising the brand for their hilarious takes on every matter. The condom brand has always found a way to promote their products with special creative on trending matters. India vs Australia 2nd ODI 2020 Stat Highlights.

Meanwhile, Pandey’s brilliant one-handed catch to send back Australian opening batsman got India rolling in the must-win encounter. Pandey, stationed at cover-point, pulled off a one-handed stunner to dismiss Warner off Mohammed Shami. Warner, who hit a century and was involved in the match-winning double hundred partnership with Aaron Finch, looked in good touch during his 12-ball 15 runs stay at the crease. Looking to drive a length delivery from Shami Warner only managed to find the flinging palm of Pandey in the 4th over of Australia’s 341-run chase.

Earlier, India posted 340 runs on board after being asked to bat first. Shikhar Dhawan was the top scorer for the hosts with a brilliant 96w while Virat Kohli (78) and KL Rahul provided the impetus at the middle and towards the end. The victory helped India level the three-match ODI series after a humiliating defeat at Mumbai.