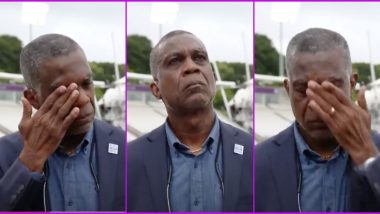 Former West Indies fast bowler and famous commentator Michael Holding broke down during a TV interview with Sky News while recalling a racism incident involving his parents. Holding was seen in tears during a short interview. This comes after the former Windies great’s powerful anti-racism message at the start of the England vs West Indies at The Ageas Bowl in Southampton. On day two of the Test match, Holding was asked about the racism, and in response, the 66-year-old broke down. Michael Holding Delivers a Powerful Message About Black Lives Matter Ahead of ENG vs WI, 1st Test 2020 (Watch Video).

“To be honest, that emotional part came when I started thinking of my parents. And it’s coming again now. Mark, I know what my parents went through. My mother’s family stopped talking to her because her husband was too dark. I know what they went through, and that came back to me immediately,” Holding said, wiping tears from his eyes,” Holding said while in tears. The former cricketer was seen wiping his tears and struggling to speak. Nasser Hussain Recounts His Experience With Racism and How People Called Him ‘Saddam’ (Watch Video).

Former West Indies cricketer, Michael Holding breaks down on live television as he recalls the prejudice his parents had to go through.

“Well, it’s going to be a slow process, but I hope. Even if it’s a baby step at a time. Even a snail’s pace. But I’m hoping it will continue in the right direction. Even at a snail’s pace, I don’t care,” Holding said on being asked whether things will change from now on.

“I hope people understand exactly what I’m saying, and exactly where I’m coming from. I’m 66 years old. I have seen it, I have been through it and I have experienced it with other people. It cannot continue like this - we have to understand that people are people,” he added.

(The above story first appeared on LatestLY on Jul 10, 2020 11:12 AM IST. For more news and updates on politics, world, sports, entertainment and lifestyle, log on to our website latestly.com).