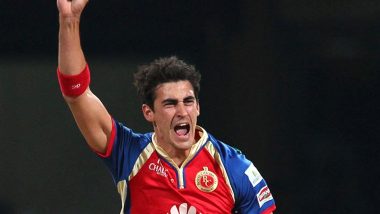 Australia’s pace spearhead Mitchell Starc doesn’t feature in any Indian Premier League (IPL) squad as of now as he decided to pull out of the IPL 2020 auctions. However, the left-arm speedster can reconsider his decision if the gala T20 tournament takes place in October. According to reports, IPL 2020 could take place in October-November as the ICC T20 World Cup is likely to postpone to 2022. However, Starc, who pulled out of the last two IPL auctions, doesn’t have an IPL contract and as per the current rules, he’s not eligible to participate in the cash-rich league. However, the BCCI might well change some rules if IPL takes place later in the year. Mitchell Starc Eager to Play ‘Pink-Ball Test Against India’, Says, Will Be Great for Making Cricket Proper Contest.

"I'd consider it, I'd think about it (On being asked about participating in IPL if it takes place in October)," Starc told cricket.com.au. "Obviously it'd be right at the start of our domestic season as well so it'd be a fair bit to consider. But I don't currently have a contract, so I currently don't have to worry," he added.  India Tour of Australia 2020–21 Likely to Go Ahead As per Schedule

The talismanic left-arm pacer played his last IPL game in 2015 for Royal Challengers Bangalore. He missed out the 2016 season because of an injury while he pulled out of actions in 2017. Kolkata Knight Riders bought Starc for a whopping INR 9.8 crore in 2018. However, he missed the season again due to an injury. He pulled out in the last two seasons too.

As Starc said, he doesn't have to worry about the fate of IPL 2020 as he doesn’t have a contract. However, many other Aussie players like David Warner, Aaron Finch and Glenn Maxwell have massive contracts. In fact, Starc’s partner-in-crime Pat Cummins was bought by Kolkata Knight Riders for whopping INR 15.5 crore in 2020 IPL auction, becoming the most expensive overseas player in IPL history.

Starc further said that he won’t have any issues if Cricket Australia allow other players to feature in IPL instead to playing domestic cricket competitions. "There's a lot of things that would have to go into that I assume. Cricket Australia would have to clear those guys so if they're clear to go, I don't see a problem with it. They're pre-existing contracts and they would have been playing anyway. There's obviously a different hurdle of domestic cricket there. It'd be an interesting decision, not one I'd have to make, so I'll let them make their decisions," Starc concluded.

(The above story first appeared on LatestLY on Jun 01, 2020 10:38 AM IST. For more news and updates on politics, world, sports, entertainment and lifestyle, log on to our website latestly.com).