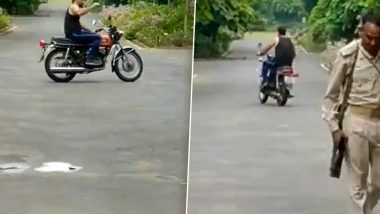 Former Indian captain MS Dhoni celebrated his 39th birthday on Tuesday (July 7) and wishes poured in for him from all around the world. On the special occasion, some of his fans gathered outside his farmhouse in Ranchi in order to wish the talismanic wicket-keeper batsman. Well, they weren’t able to greet the two-time World Cup-winning captain. However, they managed to get some glimpses of him. Some fans managed to capture a video in which Dhoni was seen enjoying a bike ride at his residency. To acknowledge his fans, the veteran cricketer also waved his hand at them but he chose to stay away due to the COVID-19 restrictions. Hardik Pandya & Krunal Pandya Reach Ranchi to Celebrate MS Dhoni's Birthday.

As the CSK captain isn’t very much active on social media in recent times, fans are unable to get regular updates about him. However, he often gets featured in the photos and videos shared by his wife Sakshi Rawat. Meanwhile, let’s have a look at the viral video of the talismanic cricketer. MS Dhoni Birthday Message: Wife Sakshi Rawat Shares Heartwarming Post for Her Husband As he Turns 39.

Speaking of Dhoni’s birthday, many cricket stars like Virat Kohli and Rohit Sharma took to social media and extended greetings for the Ranchi-born cricketer. In fact, Hardik Pandya and his brother Krunal reached Ranchi to celebrate the former Indian captain’s birthday.

Meanwhile, Dhoni took a sabbatical from the game after India’s exit from ICC Cricket World Cup 2019, fuelling the speculations of his retirement. He, however, was set to lead Chennai Super Kings in Indian Premier League (IPL) 2020. However, just like many other sporting events, the T20 tournament also got postponed indefinitely due to the COVID-19 crisis.

(The above story first appeared on LatestLY on Jul 09, 2020 03:18 PM IST. For more news and updates on politics, world, sports, entertainment and lifestyle, log on to our website latestly.com).