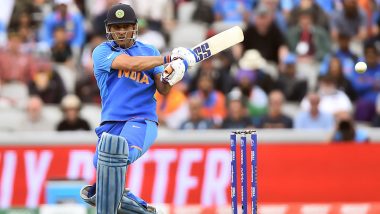 The future of MS Dhoni in international cricket has been a hot topic of discussion among the cricket fans as the former India captain hasn’t played a professional match after India’s heart-breaking loss against New Zealand in the semi-finals of ICC Cricket World Cup. However, Dhoni’s manager Mihir Diwakar has confirmed that the wicket-keeper batsman is not even thinking about retirement at the moment. Diwakar has even claimed that the 39-year-old is determined to play the Indian Premier League (IPL) 2020 as he started practising for the T20 tournament before it got postponed indefinitely due to the COVID-19 crisis. MS Dhoni New Look in Latest Photos Go Viral.

“Being friends, we don’t talk about his cricket. But looking at him, he’s not all thinking about retirement,” Diwakar told PTI. “He is very determined to play the IPL. He has worked really hard for this. If you remember he was there in Chennai one month in advance before everything was shut down,” he added.

With the Board of Control for Cricket in India (BCCI) leaving no stones unturned to conduct IPL this year, chances of Dhoni making a comeback are quite high. In fact, Diwakar also said that the two time World Cup winner is maintaining proper fitness at his farmhouse in Ranchi. MS Dhoni's Return to Indian Team a 'Tricky Situation', He Didn't Want to Play for Sometime: MSK Prasad.

“He has maintained his fitness regimen at his farmhouse and will start practice after the lockdown is lifted. Everything now depends on how fast the situation returns to normalcy,” Diwakar opined.

BCCI is seeking to conduct IPL 2020 in September and October. However, they have to wait for the official announcement from International Cricket Council (ICC) regarding the postponement of T20 World Cup which was scheduled to be played in Australia in October. (With Agency Inputs)

(The above story first appeared on LatestLY on Jul 09, 2020 09:44 AM IST. For more news and updates on politics, world, sports, entertainment and lifestyle, log on to our website latestly.com).