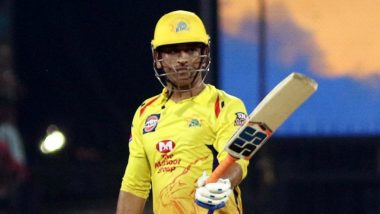 MS Dhoni is all set for IPL 2020 as the CSK skipper tested negative during the mandatory COVID-19 tests and will soon be joining Chennai Super Kings in their training camp. The 39-year-old was tested at his hometown on Wednesday after staff from the micro praxis lab at Guru Nanak hospital in Ranchi visited his house to take the sample. And with the former Indian skipper ready to take the field again, MSD fans started trending #MSDhoni on Twitter. MS Dhoni Tested Negative for Coronavirus, All Set to Join CSK.

MS Dhoni hasn’t played competitive cricket since India’s exit from the 2019 Cricket World Cup semi-finals against New Zealand but was expected to return to cricketing action in the latest edition of Indian Premier League. But as the tournament was postponed due to coronavirus pandemic, fans started to get restless over whether they will get to watch their favourite player in competitive action again. Hotstar-Jio TV Deal For Indian Premier League 13 Live Streaming Called Off.

But with the governing council receiving the green light to host the tournament in UAE later this year and Dhoni clearing the mandatory coronavirus test, the former Indian skipper is all set to take the field once again. So it was no surprise that fans started sharing their excitement on social media platforms.

Eagerly Waiting to watch the Lion enter the field to hunt. He will Roar louder this time. #MSDhoni pic.twitter.com/sANPhIpIU5

#MSDhoni Get Ready for Rock🔥

Bahubali Returns to ground. Eagerly waiting to see #MSDhoni batting/Keeping/Captaincy and most important his Smile. pic.twitter.com/SHdBj5I79w

IPL 2020 is scheduled to take place in UAE from September 19 onwards. Stadiums in Abu Dhabi, Dubai and Sharjah will host all the games in the tournament. Which will be played behind closed doors to maintain social distancing protocols amid the coronavirus epidemic.

This will be the third time that IPL will be played outside India, 2009 and 2014 being the other two occasions. During the 2014 edition, opening 20 matches were played in the United Arab Emirates with the remaining fixtures completed in India. While in 2009 edition, the cash-rich league was played entirely in South Africa.

(The above story first appeared on LatestLY on Aug 13, 2020 08:55 PM IST. For more news and updates on politics, world, sports, entertainment and lifestyle, log on to our website latestly.com).