Mushfiqur Rahim Recalls Bangladesh’s Triumph Against Rahul Dravid and Co in 2007 World Cup, Says ‘India Thought They Would Get Some Batting Practice’ 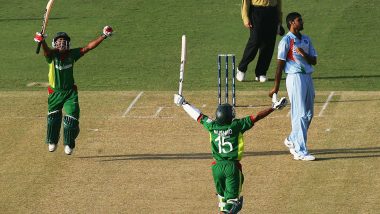 Indian Cricket team had a disastrous campaign in the ICC Cricket World Cup 2007 where they were knocked out in the group stage of the tournament. Their loss against Bangladesh in the tournament, which will go down as one of the greatest upset in the history of the game, also played a vital role in their ouster. The Bangla Tigers dominated Rahul Dravid and Co throughout the clash at the Port of Spain and registered a historic five-wicket triumph. Bangladesh wicket-keeper-batsman Mushfiqur Rahim, who scored an unbeaten 56 in that match, recently recalled the encounter and claimed that India approached the game as an opportunity for the batting practice. Mushfiqur Rahim Believes Bangladesh Can Enter Top-Six in Tests.

Mushfiqur who was playing his 12th ODI match also revealed that he was quite nervous ahead of the encounter. However, playing with Under-19 teammates like Shakib Al Hasan and Tamim Iqbal helped him. During the innings break against India, I learned I was going bat at No. 3. I had very little time to think about it. It was India’s first match and they thought they would get some batting practise before their big games. It was a tacky wicket. Tamim [Iqbal] gave us a good start while I was settling in. Then I had a great partnership with Shakib [Al Hasan]. It made me quite relaxed to bat with two of my U-19 team-mates on the biggest stage,” Mushfiqur said while talking to ESPNCricinfo. Mushfiqur Rahim In a Video Message Advises Fans to Take Necessary Preventive Measures Amid Coronavirus Outbreak.

Rahim further said that replacing veteran wicket-keeper Khaled Mashud was not an easy job. However, his innings against the Men in Blue gave him the realization that he can thrive at the highest level.

“There was a lot of pressure on me (before the match). Replacing Pilot (Khaled Mashud) bhai, someone who has served the Bangladesh team for a long time, was a big challenge. I thought I could get a chance if someone got injured, but I never expected to be the first choice. Until a dinner party attended by all the teams, where I saw greats like Brian Lara and Sachin Tendulkar, I hadn’t quite grasped what a World Cup was like,” he added.

(The above story first appeared on LatestLY on May 27, 2020 09:14 PM IST. For more news and updates on politics, world, sports, entertainment and lifestyle, log on to our website latestly.com).