Nathan Lyon Birthday Special: 8/50 vs India and Other Top Test Performances by the Australia Off-Spinner

Lyon took a five-wicket haul, including a first-ball wicket in his debut against Sri Lanka showing the selectors, who were searching for a spinner after the retirement of Shane Warne, he could be the one in the long run. Since then Lyon has gone to become a mainstay in the Test team and has already represented the national team in 96 Test matches. 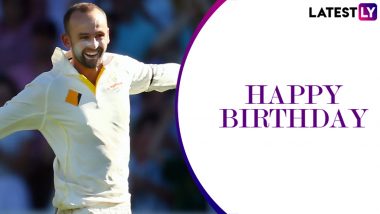 Australia off-spinner Nathan Lyon celebrates his 33rd birthday on November 20, 2020 (Friday). He is already the third-highest wicket-taker for Australia in Test matches and 16th highest in world cricket. Lyon is just 10 short of reaching 400 Test wickets and is only behind Glenn McGrath (563) and Shane Warne (708) in the Australian list. He is only the third Australian to take a wicket with his first delivery in Test cricket and is regarded as the most successful Australian off-spinner. As Lyon celebrates his 33rd birthday, take a look at his five best Test performances. Australia Jumps Past India to Claim the Top Spot on the ICC World Test Championship, Check Updated Points Tally.

Born in 1987, Lyon started as ground staff and moved from Canberra to Adelaide as a pitch curator where South Australia’s Big Bash coach Darren Berry was impressed with his bowling and included him the Redbacks T20 team in 2010-11. Such was his remarkable rise that by July 2011, Lyon was named in Australia’s Test squad. He was picked for the three-Test series against Sri Lanka after impressing in Australia ‘A’ tour of Zimbabwe. India vs Australia 2nd Test 2020: Melbourne Cricket Ground’s Drop-In Pitch May Not Be Up to Mark, Says MCC Chief Executive Stuart Fox.

Lyon took a five-wicket haul, including a first-ball wicket in his debut against Sri Lanka showing the selectors, who were searching for a spinner after the retirement of Shane Warne, he could be the one in the long run. Since then Lyon has gone to become a mainstay in the Test team and has already represented the national team in 96 Test matches and has picked 390 wickets. He has also played 29 ODIs and two T20Is but not with great returns. Take a look at some of his best Test performances for the baggy greens.

Lyon was playing his debut Test and struck with his first delivery to dismiss Sri Lanka great Kumar Sangakkara, who was foxed with the turn and added bounce. Michael Clarke took a brilliant catch at first slip to remove the Sri Lankan. Lyon then ran through the Sri Lanka lower-order and finished the first innings of the Test matches with figures reading 5/34 in 15 overs. He had arrived.

Nathan Lyon’s third 10-wicket haul helped Australia whitewash New Zealand 3-0 in the Test series. With runs on his back, Lyon took two of New Zealand’s top three batsmen in the first innings and then cleaned up the lower order to give his side a healthy lead before rattling the visitors’ middle-order in a deteriorating pitch in the second innings to lead Australia to 279 runs win. His figures from the first innings read 5/68 and it only got better in the second essay where he took 5/50, all five of them between No 3 and 8 in New Zealand’s batting order.

Lyon dismissed all of India’s batsmen including Virat Kohli and Cheteshwar Pujara and barring Abhinav Mukund and Karun Nair to finish with figures of 8/50 in 22.2 overs to bundle India for 189 after they had elected to bat first. The hosts did fight back in the next three days to win the game.

The Test match and the victory remains more memorable for Steve Smith’s twin hundreds on his return to Test cricket post the ball-tampering scandal in 2018. His record was an Ashes feat. But even though it remains below the radar, Lyon’s 6/49 in the second innings was instrumental in a memorable Aussie win on England soil. He had proved costly in the first innings and gave away 112 runs for three wickets. Australia though had Smith batting on a different surface.

They set hosts England an improbable 397 runs to win and then Lyon and Pat Cummins ran through the batting. Lyon took six and Cummins four to lead Australia to a 251-run win. Lyon first removed Jason Roy, Joe Root and Joe Denly in space of 25 runs before returning and removing Ben Stokes. He also got Moeen Ali and Chris Woakes in successive deliveries leaving Australia one-wicket shy of victory.

MS Dhoni had just from retired from Test cricket and Virat Kohli was making his debut as an India Test captain. Kohli was on song and nearly led India to a memorable win and the Test was only decided when he pulled Lyon straight to Mitch Marsh at deep midwicket. Lyon had taken 5/134 in the first innings but it was his 7/152 in the second innings that won Australia the match by 48 runs. He started with the dismissal of Pujara and then trapped Murali Vijay on 99 to start India’s slide with the visitors chasing 364.

Ajinkya Rahane followed for a five-ball duck and Rohit Sharma for 6. But when the day ended Kohli was still batting. Lyon completed his five-for and his first 10-wicket haul in Test matches by going through Wriddhiman Saha. But it was the wicket that followed he would cherish most. With partners running out, Kohli went on the attack but found Marsh at mid-wicket. Lyon had Ishant Sharma stumped to end the Test match.

(The above story first appeared on LatestLY on Nov 20, 2020 08:45 AM IST. For more news and updates on politics, world, sports, entertainment and lifestyle, log on to our website latestly.com).