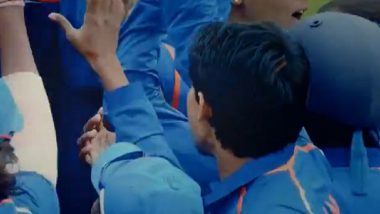 New Delhi, July 31: The Indian women's cricket team is among the several athletes that feature in a Nike advertisement which has gained plaudits for its editing and the effective manner in which it delivers its message. The video talks about the unifying power of sport, which has largely gone into a freeze around the world due to the coronavirus pandemic.

The matches and tournaments that are being held are being conducted with little to no spectators around. Wieden + Kennedy, an advertising agency that is best known for its video work with Nike, has developed the video through "4,000 pieces of footage" the sporstwear giant says on its website. Nike Reacts to George Floyd's Death Saying ‘Don’t Do It’, Addresses Racism in America And Encourages Change (Watch Video).

Nothing can stop what we can do together. You can’t stop sport. Because #YouCantStopUs.

"Closed gyms and empty stadiums haven't stopped athletes from pushing forward and using their platforms to help create change. Through those actions, sport shows us what an equal playing field looks like — and reminds us that a better future is possible," it said.

(The above story first appeared on LatestLY on Jul 31, 2020 07:51 PM IST. For more news and updates on politics, world, sports, entertainment and lifestyle, log on to our website latestly.com).