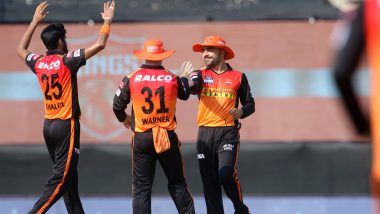 Sunrisers Hyderabad beat Punjab Kings by nine wickets to record their first win in IPL 2021. SRH chased down the 121-run target in 18.4 overs to register their first points in the table while Punjab Kings have now lost three successive matches after starting the tournament with a win. KL Rahul-captained Punjab Kings were bowled out for 120 runs after opting to bat first. Only five Punjab Kings batsmen managed to reach double figures with Mayank Agarwal and Shahrukh Khan joint top-scoring for PBKS with 22 runs. Sunrisers Hyderabad in reply only lost David Warner and were home with eight balls and nine wickets to spare. PBKS vs SRH Highlights of VIVO IPL 2021.

Khaleel Ahmed was the star with the ball for Sunrisers Hyderabad with the left-arm pacer taking 3/21 to help bundle out Punjab Kings for a paltry score. Abhishek Sharma picked two wickets while Bhuvneshwar Kumar, Siddharth Kaul and Rashid Khan shared a wicket apiece. Mayank Agarwal’s 22 from 25 balls and the same score from Shahrukh Khan off 17 deliveries helped PBKS cross the 100-run mark. But the score was too little to defend and Warner and Jonny Bairstow gave SRH a perfect start with a 73-run opening stand. Bairstow and Williamson then took Hyderabad home without losing any more wickets. Take a look at the stat highlights from the PBKS vs SRH match.

The victory was Sunrisers Hyderabad’s first win in IPL 2021 after three consecutive defeats while the Punjab Kings have now lost three matches on the trot after starting the season with a victory.

(The above story first appeared on LatestLY on Apr 21, 2021 07:20 PM IST. For more news and updates on politics, world, sports, entertainment and lifestyle, log on to our website latestly.com).