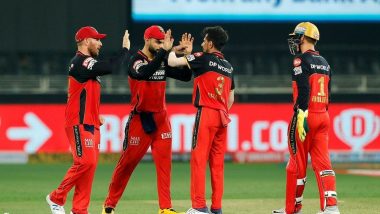 Royal Challengers Bangalore has started off their IPL 2020with a 10 run win against the Sunrisers Hyderabad. The team played as a unit and led the team to a 10 run where. The batting, bowling and even the fielding, everything panned out as planned for the Royal Challengers Bangalore. After this win, RCB fans went berserk on social media and kept posting memes. The memes have really gone viral where the followers have been teasing the ones who had once ridiculed them for a series of defeat. Virat Kohli and team made sure to put their best foot forward in the game at the Dubai International Stadium. Virat Kohli Shares RCB Appreciation Post After Team Defeats SRH by 10 Runs in Dream11 IPL 2020, Posts Pics After the Win.

It was Devdutt Padikkal, AB de Villiers and Yuzvendra Chahal who led the team to a win as they performed their roles quite well to seal a win. Paddikal made 56 runs and the South African cricketer also scored a half-century from 30 balls. The two played a vital role in helping the team reach 163 runs losing five wickets. Meanwhile, Yuzvendra Chahal scalped three wickets. Shivam Dube and Navdeep Saini got two wickets each. Now, let's have a look at the tweets below:

Me to #RCB haters😼 : pic.twitter.com/yjLVPMuUw3

AB de Villiers walked away with the man of the match award as he scored half-century from 30 balls. Umesh Yadav and Washington Sundar were the ones who could not get a single wicket.

(The above story first appeared on LatestLY on Sep 22, 2020 10:07 AM IST. For more news and updates on politics, world, sports, entertainment and lifestyle, log on to our website latestly.com).